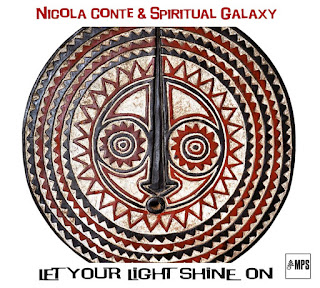 The Italian guitarist and bandleader Nicola Conte has recorded his first album for the legendary, recently re- established MPS records. Conte has brought with him an ensemble of stars including trumpeter Theo Croker, saxophonists Logan Richardson and Magnus Lindgren, and singer Zara McFarlane. Recorded in Bari, Italy and Johannesburg, South Africa, “Let Your Light Shine On” is a cohesive and powerful work of art that crosses the border between soul and spiritual Afro-jazz.

For his new album, Conte has casually interwoven soul and grooves pulsing with the beat and breath of Africa. In doing so, he combined elements that seemingly do not belong together. This innovative jazz revivalist has always been open to sounds of every sort and color. Born in 1964, Conte formed the artist collective Fez in the early ‘90s in his native city of Bari, produced jazz and modern electronic-oriented Bossa Nova, and recorded film scores. Conte’s eighth album conveys his interest in spiritual deceleration (“We should not be hemmed in by materialism. We need new perspectives!”).

The foundation of the album is Conte’s live band, Spiritual Galaxy. Conte plays guitar and is accompanied by such top international stars as trombonist Gianluca Petrella, who has been awarded “Best Emerging Artist” by the prestigious DownBeat jazz magazine, Swedish tenor saxophonist Magnus Lindgren, and Finnish drummer Teppo Mäkynen. They meet up with pianist Pietro Lussu, bassist Luca Alemanno, and singer Bridgette Amofah. The band also includes two up-and-coming stars of the younger generation of jazz musicians from the USA, players who don’t shy away from Hip Hop, R&B, and electronic music – alto saxophonist Logan Richardson and trumpeter Theo Croker.

A Scandinavian-American-Italian all-star band, a truly cosmic and international ensemble – complimented by a sensitive guest appearance by the celebrated British singer Zara McFarlane.

Let Your Light Shine On is Conte’s debut on the legendary MPS label, which has recently resumed releasing new recordings. “For me, when it comes to European labels, MPS has always been leading the way,” the Italian said. “Jazz Meets the World on MPS – that was their motto. It wasn’t about exploiting trends, it was about genuine artistic expression.”