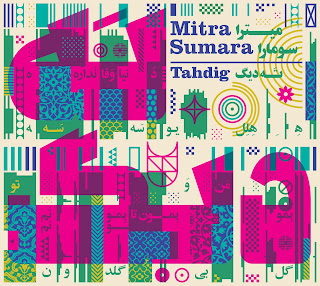 Yvette was adopted and raised by American parents in Los Angeles and through her search for her birth parents, came the journey and fruition of Mitra Sumara. After twenty years of writing and recording her own music (avant-pop group Birdbrain, I Fly; and H*E*R, Songs About the Mysteries of Housework and Nature) and performing in numerous rock bands and new music ensembles, Yvette discovered the popular music of pre-Revolutionary Iran. She founded Mitra Sumara after studying Farsi and uniting with her Iranian birth father. This project is an outgrowth of Yvette’s journey to reclaim her personal identity, and a love letter to the beauty of Iranian culture and music.

Yvette passionately tells, “As an adopted person, it is tremendous to find and make a connection with birth parents or any other blood relatives. My Iranian side is via my father which, for me, was the most compelling as I had always felt it was the key to my personal identity. I discovered this music while searching for my father. After I found him in 2009, I met other half-siblings, cousins, and an aunt. Then I began to study Farsi more seriously. A couple of years later, I created a band to play this awesome music. This music should be as popular among Americans as 70s Brazilian music, in my view. Mitra Sumara is an unexpected party band of American musicians putting a spin on Iranian tunes to bridge cultures. For years I sought a way to participate in the Iranian diaspora and this is my contribution. It’s a celebration of family and connection. It’s also the chance to present positive aspects of Iranian culture to the West.”

Although Mitra Sumara was founded in 2011, the group is only now ready to release their first full length. As the saying goes, “Good things come to those who wait,” and the results on Tahdig are definitely worth it. The reasoning behind the wait came down to finding the right producer for the project which Yvette eventually found with Salmak Khaledi. Meeting through a mutual friend, it wasn’t until Yvette discovered that Salmak was mentored at the Tehran Conservatory by session musicians that performed on most of the pre-Revolutionary pop recordings, that she knew she found the perfect producer for Mitra Sumara as the spirit of the original music comes full circle.

The diverse ten-track album showcases 70s Iranian pop and funk songs, spun with updated beats, modern production, NYC’s indie spirit, and psychedelic touches that is unquestionably Mitra Sumara. The band has taken forgotten music and has refreshed it with their own touch. The album title word Tahdig is a popular type of Persian food that translates into ‘bottom’ (‘Tah) and ‘dig’ (Pot). That is exactly what Mitra Sumara did through digging through these selections and stirring their pot of influences throughout.

In addition to Yvette, the full cast of musicians in Mitra Sumara is an all-star group consisting of Peter Zummo (trombone), Bill Ruyle (hammer dulcimer), Julian Maile (guitar), Jim Duffy (keyboards), Nikhil Yerawadekar (bass), Michael Evans (drums/congas), and Kaveh Haghtalab (drums/percussion). You may recognize Peter Zummo and Bill Ruyle as members of Arthur Russell's various bands, Nikhil Yerawadekar from Antibalas, and Michael Evans from David Grubbs, Michael Gira (Swans), Carla Bley, and Aimee Mann to name a few. The list goes on with such a top pedigree of talent that also stretches to the artwork with cover design by Iranian artist Homa Delvaray and videos from Alice Cohen, who is creating it using all Iranian imagery and cut outs of the band.

While most Americans have no idea what this music is, these songs have deep meaning for Iranians who lived in Iran before the American hostage crisis and the Iranian Revolution of 1979. The Revolution ended the careers of many popular singers. Many left for Europe or LA and still tour to this day. Younger Iranians have fond memories of their older relatives listening to these songs. Yvette adds, “This music bonds generations. I feel super privileged to be able to play this music and have Iranians and Americans come to our shows and have a good time.” In an era where governments want to build walls instead of bridges, it’s refreshing to hear a band bridging cultures and generations, who help keep history intact, while bringing the party vibes too. Don’t miss them in New York City on June 7th for their album release party at Nublu. More info at http://www.nublu.net