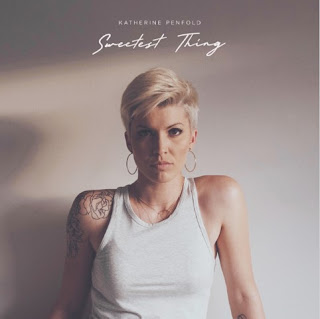 Soul resides just beneath the exterior. Upon meeting Katherine Penfold, you might initially notice the prominent tattoos along her shoulder and arms before the conversation veers to her lifelong affinity for motorcycles, skateboarding, or woodworking - let alone music. Listening to her sound elicits a different impression altogether - as a sultry, smooth, and sweet delivery belies the rustic badassery she exudes with ease. This gorgeous contrast illuminates the artist’s 2019 full-length debut, SWEETEST THING, available October 4th.

With a story to every song and a really powerful vibe, SWEETEST THING is the musical juxtaposition that is Katherine Penfold. Although her tattooed, 6 ft, tomboyish exterior seems harsh to the naked eye, Penfold’s quirky Nova Scotia and Brandon University classically-trained upbringing creates a soft and clear musical voice that is all about love and joy. With this unique persona, Penfold went on to win the GROOVEFM singer/songwriter competition, perform alongside the likes of Hugh Laurie, Jeff Lorber, Brad Turner, and Jodi Proznick, and even sell out headline shows. Her fascination for construction and architecture drove her to build her own studio - one of the many things she loves creating from scratch with her hands. While co-producing this album with David Sikula, Penfold channels these experiences and her spirited style to a soul, funk, and R&B 10-track wonder.

She taps into this vibe on the first single, her cover of Roberta Flack’s “Feel Like Makin’ Love.” Over dreamy keys and slick percussion, she breathes new life into the classic staple, sliding into the pocket with seductive bliss. She co-wrote “Better” alongside GRAMMY® Award-winning producer Chin Injeti [Drake, Eminem]. Its slinky groove seesaws from jazzy verses into a resounding chorus as she croons, “You make me feel better,” in a call-and-response over a bass warble. “I struggle with depression and anxiety,” she admits. “The song is for my partner. He finds a way of making me feel better during those times. It’s dedicated to the person who helps you up.” Elsewhere, fluttering keys and dreamy production underscore “Far Away” on which she joined forces with Moonchild’s Amber Navran. The track details “the heartache of a long-distance relationship.” Handclaps and sky-high vocal runs abound on “Unapologetic,” highlighting the scope of her showstopping range. “It’s about stepping up and not hiding anymore,” she goes on. “It’s a powerful moment for me.” In the end, these moments define the duality at the heart of SWEETEST THING. The album will be released in full October 4th, 2019, with the second single, “Far Away”, releasing this Friday, July 26th.