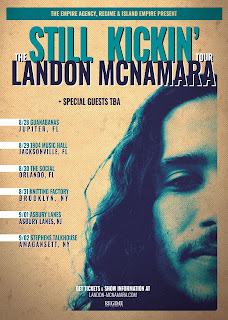 Reggae artist sensation Landon McNamara is set to embark on a US tour this August! From California to Florida, all the way to New York, Landon is touring in support of his latest album release Still Kickin’. A dubby and relaxing album full of soulful vocals and honest lyrics, the new album is sure to leave listeners feeling irie.

Landon’s music is inspired by reggae, alternative and acoustic music. His debut album titled “A Dollar Short & A Minute Late” impressively reached #1 on the iTunes and Billboard Reggae Album charts. And now with his sophomore album Still Kickin’ out now, Landon McNamara will serenade audiences with his new tunes and fan favorites including “Stony Haze” and “Loss for Words”. Landon says,“Much Mahalos to everyone out there who has supported my career! Without your guys’ support I would not be where I am today.” Keep on the lookout for him to come to a city near you!
Tour Dates:
AUG 28 – Jupiter, FL – Guanabanas
AUG 29 – Jacksonville, FL – 1904 Music Hall
AUG 30 – Orlando, FL – The Social
AUG 31 – Brooklyn, NY – Knitting Factory Brooklyn
SEP 01 – Asbury Park, NJ – Asbury Lanes
SEP 02 – Amagansett, NY – The Stephen Talkhouse