IT’S SUCH A GOOD FEELING: THE BEST OF MISTER ROGERS 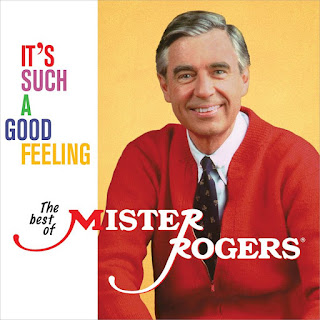 It’s Such a Good Feeling: The Best of Mister Rogers, a collection of 23 songs by Fred Rogers — beloved host of the landmark children’s television series Mister Rogers’ Neighborhood — will be released by Omnivore Recordings on October 4, 2019. The album, which is backed by long-time collaborator and pianist Johnny Costa, Carl McViker on bass, and percussionist Bobby Rawsthorne, features classics like “Won’t You Be My Neighbor?,” “You Are Special,” and the title track, plus five previously unissued tracks, including the show’s original closer, “Tomorrow.”

Produced at WQED-TV in Pittsburgh and premiering on national public television more than five decades ago, Mister Rogers’ Neighborhood has long been a part of the lives of countless kids and adults who experienced and learned from Fred Rogers’ timeless wisdom. While the series’ staying power never lapsed, Neville’s acclaimed 2018 documentary Won’t You Be My Neighbor reawakened the public’s love for Mister Rogers, and introduced a new generation to him. With the upcoming November release of A Beautiful Day in the Neighborhood (starring Tom Hanks as Rogers), the cherished host and his Neighborhood will once again be front and center in the hearts, minds, and ears of everyone.

Rogers found his perfect accompanist in Costa. The performances, flourishes, and embellishments that Costa and the band made during the show (all performed live) not only enhanced the experience, but also taught viewers about jazz.

In 1986, Rogers, Costa, McViker, and Rawsthorne teamed for the last record from Mister Rogers’ Neighborhood Records: Johnny Costa Plays Mister Rogers’ Neighborhood Jazz. The band takes an instrumental journey through 13 of Rogers’ songs, retaining their original compositional intent, while breathing new life into them. The release has been out of print for decades, fetching top dollar from collectors. It returns for the first time on CD and Digital.

Director Neville contributes an introduction in the packaging, while Musoscribe’s Bill Kopp traces Costa’s history and work on the program in an informative essay.

Johnny Costa Plays Mister Rogers’ Neighborhood Jazz
1. Won’t You Be My Neighbor?
2. You Are Special
3. It’s You I Like
4. Sometimes People Are Good/Children Can Medley
5. What Do You Do?
6. I Like To Take My Time
7. Everybody’s Fancy
8. Please Don’t Think It’s Funny
9. Something To Do While We’re Waiting
10. Many Ways To Say I Love You
11. Then Your Heart Is Full Of Love
12. Did You Know?
13. It’s Such A Good Feeling