By Special Arrangement", the new album by Aussie soul heroes The Bamboos 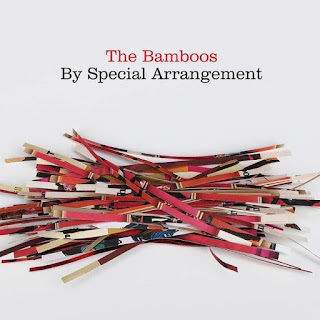 Bandleader Lance Ferguson and his nine piece Melbourne outfit The Bamboos have come a long way since forming in 2001. Initially inspired by the instrumental raw funk of the late ‘60s and early ‘70s, they made waves internationally and were quickly labelled as one of the greatest funk and soul bands of our time. But while many would be happy to simply soak up the praise and keep on keeping on, The Bamboos have proven that they are more than meets the eye; over 8 acclaimed albums their evolution in sound and style has consistently confounded and exceeded expectations, pulling the rug from under the feet of those who like to pigeonhole.

The Bamboos signed to respected Brighton (UK) indie label Tru Thoughts in 2005, becoming a real cornerstone of the roster. Across their five albums on the label – debut “Step It Up” in 2006, follow-up “Rawville” in 2007, third opus “Side-Stepper” in 2008, the aptly-titled “4″ in 2010 and “Medicine Man” in 2012 – the metamorphosis of The Bamboos has been full of twists and turns, and it continues apace. A seasoned DJ, solo producer (aka Lanu) and all-round insatiable music obsessive, Ferguson‘s myriad influences and passion for pushing things forward ensure that each new release is a discovery for devout fans and newcomers alike.

The band’s fifth long-player “Medicine Man” released in June 2012 was a watershed – a forward-looking record brimming with fresh ideas, stellar turns, classic songwriting and a brand of multi–layered pop they can truly call their own. Guest vocalists Aloe Blacc, Tim Rogers (You Am I), Megan Washington, Daniel Merriweather, Bobby Flynn, alongside resident singers Kylie Auldist and then newcomer Ella Thompson helped make the album their biggest until then.

The Bamboos’ ridiculously enjoyable live shows have seen them perform at pretty much every major festival in Australia. In Feb 2010 the band played the prestigious headline set at The St Kilda Festival to over 7000 people. The Bamboos have also toured Europe and the U.K three times, performing sell-out shows at esteemed venues including The Barbican and The Jazz Cafe in London and in countries including France, Spain, Italy, Germany, Slovakia, Belgium, Switzerland and Ireland. As the go-to band for tight and heavy vibes, they have also performed as the backing band for international artists including Eddie Bo (US), Syl Johnson (US), Joe Bataan (US), Eddie Floyd (US), Betty Harris (US) and Alice Russell (UK).

Songs by The Bamboos have been regularly on playlists of national radio stations in Australia, the UK, France, the US, Japan and beyond. The unshakable charm of their songs has also seen them licensed to hit movies including “Crazy Stupid Love”, the soon to be released “Adore” with Naomi Watts & Robin Wright, and TV shows such as “Grey’s Anatomy”, “CSI New York”, “One Tree Hill”, “Ugly Betty” and more.

Like its predecessor, the band’s sixth album “Fever In The Road” was co-produced by ARIA- nominated, multi-instrumentalist studio wizard John Castle – ranked amongst the first-call producers in Australia. The new record (the first on Ferguson‘s own Pacific Theatre label) sees Castle and Ferguson venturing into sonic landscapes The Bamboos have previously touched on but never fully inhabited. There is a sense that the music is leaner and more muscular, yet upon closer inspection the tracks reveal themselves to be densely multi-layered in a ‘Wall Of Sound’ style.  It’s this aural complexity and depth that allows darker moods to roam through the album, taking their sound to a new place. Choosing this album to reflect the band as it is on stage, the vocals are split between Kylie Auldist and Ella Thompson. And each bring contrasting styles that complement each other magically, but show The Bamboos to be utterly unique.

2015 saw The Bamboos team up with Tim Rogers for the release of “The Rules Of Attraction”, with 12 meticulously crafted songs that strike a balance between the band’s patent introverted groove and Rogers’ effervescent rock’n’swagger. The result is something that sounds varied, fresh and brimming with enthusiasm. With eighth album “Night Time People” released in 2018, The Bamboos consolidated their relationship with Kylie Auldist, effectively constructing and executing the full-length around her unmistakable voice. This release provided a backbone twisting slab of pop colored funk that reaffirmed The Bamboos in their rich and unique sound while keeping their hefty and rich legacy intact.
Posted by Jazz Chill at 12:00 AM