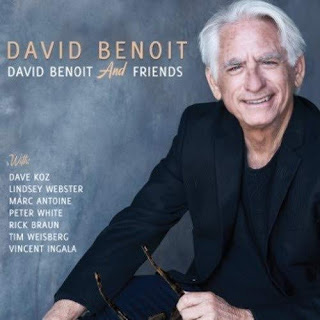 It would be hard to write the book on Contemporary Jazz without a few chapters on David Benoit. The multi-Grammy nominated and chart-topping piano wizard has enjoyed more than a four-decade career taking chances and following his own intuition. “I look at the big picture and try not to get caught up in the minor details,” reveals the pianist.

Unbound by categories and rules, the trailblazer has built an enviable career drawing inspiration from his vast influences which have included jazz, comics, film, Broadway and symphonies, to cite a few. David Benoit’s free-spirited approach has allowed him to collaborate with such diverse artists as The Rippingtons, Faith Hill, David Sanborn and CeCe Winans. Few artists can say they have performed solo piano for “Peanuts” television movies and specials for over two decades but Benoit has.

He also lent his chops in 2015 to the long awaited 3-D animated adaptation of the beloved Charles M. Schulz comic strip.  On August 23, 2019, Shanachie Entertainment will release David Benoit’s 36th recording as a leader and his first solo effort for the label. David Benoit And Friends is an exhilarating escapade of shifting moods, uplifting anthems, virtuosic playing and synergetic interplay that magnifies Benoit’s depth and vision as an artist. From original compositions and tributes to guitar maestro Kenny Burrell and NY Times Best Seller crime novelist Dean Koontz to covers by Irving Berlin, Coldplay and Portugal The Man, Benoit is nothing short of inspiring. “It comes from a very unconventional background on music,” shares the Los Angeles based pianist. “My influences were all over the place from Leonard Bernstein to The Doors.”

David Benoit And Friends is produced by drummer Bud Harner who has produced and worked with everyone from George Benson and Barry Manilow, to Jeff Lorber to Keiko Matsui, Lindsey Webster and Lalah Hathaway. David Benoit fell in love with jazz Benoit also currently hosts a morning radio show on KKJZ 88.1 FM in Long Beach, CA. In 2018, Benoit was given an honorary doctor’s degree in music from Five Towns College in New York.