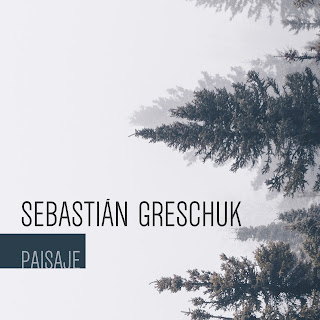 He recalls some of his more important influencers as Ambrose Akinmusire, Aaron Parks, Phillip Dizack and Walter Smith III as a few nods to giants. His overall composition takes influence from the cool era mixed with slightly dark ostinato-based grooves, highly popular in Buenos Aires jazz.

Greschuk’s sound is often reminiscent of Clifford Brown’s funkiness and Chet Baker’s coolness throughout. He recalls some of his more important influencers as Ambrose Akinmusire, Aaron Parks, Phillip Dizack and Walter Smith III as a few nods to the giants. His overall composition takes influence from the cool era mixed with slightly dark ostinato-based grooves.

Never disappointing is the dexterity of bassist Urquiza’s upper register playing. His playing on the record lends us the “wow” factor of facility in playing jazz music.
A danceable darkness takes over the opening track as Boccanera begins is adventuresome solo. ‘La Espera’ immediately lifts off in a bouncy shared melody before “settling down” into a cool ostinato and now gently accompanied what was piano and is now Fender Rhodes. The evidence of Brad Meldhau’s influence can be recalled during the return to piano during Boccanera’s solo.

The laid backness of ‘Moñongo-Cherry’ gives us a view into ohowur connected these four musicians are listening in heavily during the ballad-esque, open textured tune, with  trading solos every few phrases and ending in a frenzy melody shared by trumpet and Rhodes.
During the 2018 Buenos Aires International Jazz Festival, they were able to present this music ahead of hitting the studio.

About the tracks:
Lluvia Eterna:
The first track of the album begins with a collective improvisation as an introduction in which the instruments interact with sonic textures that oscillate like those of a storm, this introduction is not only the theme but also the disc and in this way immerses us in the Landscape. The collective improvisation gradually disappears giving place to a piano ostinato on which later it is constructed with a "feel" quite "rocker" and an angular melody of trumpet with influences of Ambrose Akinmusire that decant into a single harmonically simple but that alternates measures of 6/4 and 4/4. At the end of the trumpet solo there is a brief melodic interlude that gives rise to a metric modulation that accelerates the tempo and from which emerges a piano solo by Nicolás Boccanera on 7/8 with an aggressive character due to the intensity of the rhythm section until it ends abruptly to resume the initial ostinato and repeat the melody that this time uses the interlude in a repetitive way to end the song.
La Espera:
After a brief energetic introduction a vamp starts on a key in 11/4 influenced by the drummer Eric Harland of which a trumpet melody appears, at this moment Nicolás Boccanera leaves the pineapple and starts using a Fender Rhodes creating a new timbral proposal and immersing ourselves in a minimalist atmosphere from the melodic and harmonic aspect, but with a pronounced rhythmic intensity that gives rise to a trumpet solo on this ground on which synthesizers are added product of a post production. The trumpet solo is preceded by a single of Rhodes on this same environment that gradually disarms until Nicolás returns to the piano to star in a rubato cadence that is connected with the harmony of the introduction, this section is used for the development of the only piano and later after the reappearance of the melodic line of the introduction of the trompeta the subject begins to vanish in the initial vamp of the subject with brief commentaries and a somewhat "free" interaction.

Desafectados:
It is a theme with a format similar to a standard Jazz with an "afro" feel that oscillates between ¾ and 6/8 with a "turnaround" equal to the traditional song "Lady Bird". The melodic protagonist in this case is the flugelhorn bringing warmth to the melodic line that later becomes a dramatic interlude with a present line of double bass by Sebastián de Urquiza influenced by the theme "The Water's Edge" by Tom Harrell, who again opts for the initial form to lead to solos flugelhorn and piano. After the solos the subject resumes, but this time to give place to a vamp on which there is a solo of battery of Matías Crouzeilles like final episode.

Invierno:
It is one of the first songs composed especially for the group. It begins with an ostinato of piano in 5/4 that is sustained during all the first section of the subject to which the battery is added and a line of contrabass with a melodic lattice that soon is fused with the melody of the trumpet, this episode connects with the next section of the song that is in 7/4 with a descending harmonic cadence that in turn is an interlude prior to the trumpet solo that is developed on the first section of the song. The intention during the development of the solo is of an ascending dynamics that in its highest point decant again in the interlude, where in turn the solo continues to then give place to a single contrabass on the initial section without returning to the interlude gives foot to the ostinato and to the melody of the subject. As a final episode the theme is bouncing in the interlude this time for a short piano solo that will lead to some "trades" between the trumpet and the piano with character of ascending intensity until finishing.

Tabula Rasa:
It is the oldest compound song on the album and making it part of this album had a significant meaning. It is based harmonically on a constant structure influenced by the theme "Scene" by Tom Harrell and although it is built in ¾ in a part of the form it has a 2/4 time signature. The theme has a melodic character interpreted by the flugelhorn of long notes that are connected with the chords generating a new sense with each chord that appears. It could be said that it is the ballad of the record that has a flugelhorn solo and a double bass virtuoso of Sebastián de Urquiza.

Boomerang:
The theme begins with an introduction of Double Bass by Sebastián de Urquiza that is building the groove of this theme that is an "Up Tempo" harmonically influenced by compositions by Woody Shaw and Horace Silver and with a great rhythmic complexity that varies between bars of 4 / 4 and 7/4 while in section B of the theme in 3/4 alternates with a 4/4 time signature. In this labyrinthine but at the same time fluid context, only Rhodes, Trumpet and Double bass are developed.

Moñongo - Cherry:
This is the youngest songs on the album, it starts with a trumpet introduction until at one point the melody of the song is mentioned and the double bass is added to start with the head in the whole band. It is a slow subject and has an extensive form that leads us through different situations and that later has solos of Rhodes, Trumpet and Contrabass that alternate as if they were "trades" to quote a part of the theme to continue with a completely different section and much faster but that has to do harmonically with something that happens previously in the subject. This new section begins only with the rhodes and then the double bass and drums are added floating on this new form until it consolidates a groove in ⅝ on which the trumpet will then make a melody. The theme clearly has two very different moods and in part this is why the title of the theme is two names.
Greschuk was born in Santa Fe, Argentina, about 300 miles northwest of Buenos Aires where he started playing trumpet at the age of 9, studying classical music at the School of Music No. 9901 and with “The Children and Youth Orchestra” of Santa Fe. He was turning to jazz as a major influence and after a masterclass with USA trombonist Conrad Herwig, he was hooked!