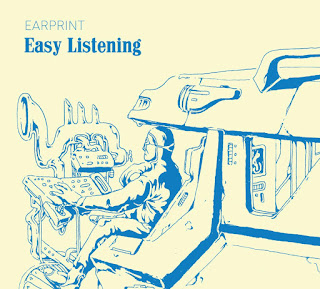 DownBeat Magazine gave the band's eponymous debut album four stars in their January 2017 issue, with the esteemed Bob Protzman declaring, "Ah, freedom-the opportunity do something your way, and then enjoy the bonus of sharing your venture with anyone interested . . . full of surprises . . . If they stay together and keep working hard, there's no telling how good Earprint will become." Well, the band has stayed together, and two plus years down the road they have evolved and grown. They have expanded their field of vision and broadened their aesthetic comprised of what liner note writer Jacob Shulman calls, "The rough energy of Nirvana meets the transcendent progressivism of Mark Turner; psychedelic tinges of Jimi Hendrix recolor the counterpoint of Thelonious Monk."

Earprint is a quartet of improvising musicians-trumpeter Tree Palmedo, saxophonist Kevin Sun, bassist Simón Willson, and drummer Dor Herskovits-who see modern jazz as an invitation to unleash their creativity, their modern-day influences, and their vision of what a jazz quartet can sound like, which is loosely tethered to the blues but shares the same root system. Actually, the blues is an important "river" for Earprint, with the streams of both rock and jazz (two major descendants of the blues) playing roles in their sound: "Hot meets cold; sweet, sour, salty, and bitter coexist. Blues is music where opposites join, where contradictions relax and paradoxes thrive, and such is the nature of Earprint," says Shulman.
Each member of Earprint has a rich, clarion sound on his respective instrument, and the band doesn't hesitate to show their brilliant collective fingerprint. As Richard Kamins noted in Step Tempest, "Earprint has vitality, a youthfulness that is refreshing; they also understand what creative music can do, where it can go when you take chances (like jazz players have been doing since the days of Buddy Bolden)." Jon Garelick added in Arts Fuse that Earprint is delivering, " . . . post-Ornette post-bop that manages to be both knotty and transparent, fractured but also lyrical and swinging, rambunctious and balanced."

Part of the appeal of Earprint is the strength of the compositions on Easy Listening, all of which are built on compelling, interlocking layers. Throughout the album, Palmedo and Sun make it clear that they have spent many, many hours dissecting and digesting the masters of their respective instruments, along with the wonderfully free world of piano-less ensembles led by the likes of Gerry Mulligan/Chet Baker, Sonny Rollins (A Night at The Village Vanguard), and the previously mentioned Ornette Coleman (beginning with Tomorrow Is The Question). In the rhythm section, bassist Willson hums along in a self-confident groove that forms the bedrock for the bands' flights, freeing up drummer Herskovits to offer textures of propulsion, swing, funk, rock, and humor. These two support, and they surprise, improvising with subtlety but without inhibition. All four musicians possess startling versatility with almost no clichéd stylistic leanings; one gets the sense they could play anything at any time and make it all sound like it was meant to be.

Shulman sums it up well:
"The excellence of its individual members aside, Earprint is notably a quartet of its time. Instead of just the usual variety of jazz styles, we are treated to a mix of rainy grunge, abstractness, harmonic constructions, and earnest anthems. These artists grew up in an era where it was easy to consume great volumes of music, and it shows. By the climax of the album, the title track, we have experienced a massive web of musical connections, ranging from satisfyingly natural to delightfully non-obvious... Easy Listening rewards the curious listener and takes them on a journey that is both vast and quick. This is the magic of smart, creative jazz."

More on Earprint:
Kevin Sun is a saxophonist living in New York City. His trio, established in 2016 and comprising bassist Walter Stinson and drummer Matt Honor, is documented on one album and performs regularly around the city. Sun plays in a number of co-led ensembles, including Earprint and Mute, which have released albums on Endectomorph Music and Fresh Sound New Talent. His creative work to date has attracted attention from leading critical publications, including The New York Times, The Village Voice, DownBeat, The NYC Jazz Record, Audiophile Audition, PopMatters, and Stereogum, among others. Sun is in-demand as a sideperson on the New York jazz and improvised music scenes, and he has performed with a variety of small ensembles and larger ensembles, most notably the John Hollenbeck Large Ensemble and Brian Krock's Big Heart Machine. He has also performed extensively across China and serves as Artistic Director of the Blue Note Beijing Jazz Orchestra, where he performs bimonthly.

Simón Willson is a Chilean-born, Brooklyn-based bassist and composer. As an eclectic and in demand sideman, he has toured with a host of different artists in Europe, the US, Canada, and South America. He has worked with a number of relevant jazz figures, such as Ethan Iverson, Rodney Green, Dave Douglas, Michael Blake, Steve Cardenas, Jim Black, Tim Miller, Jason Palmer, George Garzone, Frank Carlberg, among many others. In addition to his sideman work, he co-leads the bands Great on Paper, Family Plan, and Earprint. The latter won the "best debut album" category of the NPR Music Jazz Critics Poll in 2016. He can be heard on over twenty-five records for labels such as Tzadik, Steeplechase, Newvelle. He recently recorded an album as a member of Dave Douglas' Sextet and alongside GRAMMY award-winning guitar player Bill Frisell for pianist Elan Mehler's album TJ & the Revenge.

Tree Palmedo is a trumpeter, composer, and songwriter based in Brooklyn, NY. His work spans the worlds of jazz, free music, pop, and indie rock, and he has recorded and performed with the likes of Cuban jazz virtuoso Yosvany Terry, DIY Italian pop orchestra Tredici Bacci, singer-songwriter Ben Zaidi, underground legend JG Thirlwell, and acclaimed indie rock band The World Is A Beautiful Place and I Am No Longer Afraid To Die. After growing up in the cultural hotbed of Portland, OR, Tree graduated cum laude from Harvard and completed a Master's degree in Jazz Studies at the New England Conservatory. In Boston, he studied trumpet and improvisation with artists such as John McNeil, Vijay Iyer, and Jason Moran. In addition to Earprint, he currently plays regularly in the Brooklyn bands Tredici Bacci, Drinking Bird, and Peaceful Faces, and can often be found playing with many other improvisers, songwriters, and bands.

Dor Herskovits is an Israeli drummer and composer based in Boston. As a sought after sideman, he plays in various jazz and experimental groups on the Boston-New York line. He has also toured around the US, Canada, Europe and China. Herskovits has recorded many albums as a sideman, featured on labels such as Newvelle and Endectomorph music, alongside musicians such Grammy award-winning guitarist Bill Frisell, Michael Blake and Jason Palmer. He has also performed with George Garzone, Jon Cowherd, Steve Cardenas, Elan Mehler, TJ and the revenge, Bert Seager's Tet-rap-tych, Max Ridley's Basement Philharmonic, Daniel Rotem and Xiongguan Zhang. As co-leader of Earprint, he received critical acclaim from publications such as Downbeat magazine, NPR's critics' poll and many more. In 2018, he established the Dor Herskovits Quintet, featuring saxophonist Hery Paz, guitarist Caio Afiune, pianist Isaac Wilson and bassist Max Ridley. Their debut album Flying Elephants will be released in September 2019.
Posted by Jazz Chill at 9:40 AM