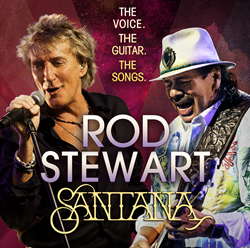 Music legends Rod Stewart and Santana will be combining their talents this summer, bringing their tour "The Voice, The Guitar, The Songs" across the United States and Canada. The tour will kick off on May 23rd in Albany and will stretch to the end of August, giving fans 18 chances to see them perform.

Both Rod Stewart and Carlos Santana rose to prominence in the music industry in the late 1960s and have had a large following ever since. While they both grew in popularity at the same time, their claims to fame were quite different. Rod Stewart is best known for his distinctive raspy voice whereas Santana paved the way for a fusion of rock and Latin American music. Both artists have been heavily decorated with awards over the years and are two of the longest-lasting and most prominent artists of all time.