ANDREW HADRO - FOR US, THE LIVING 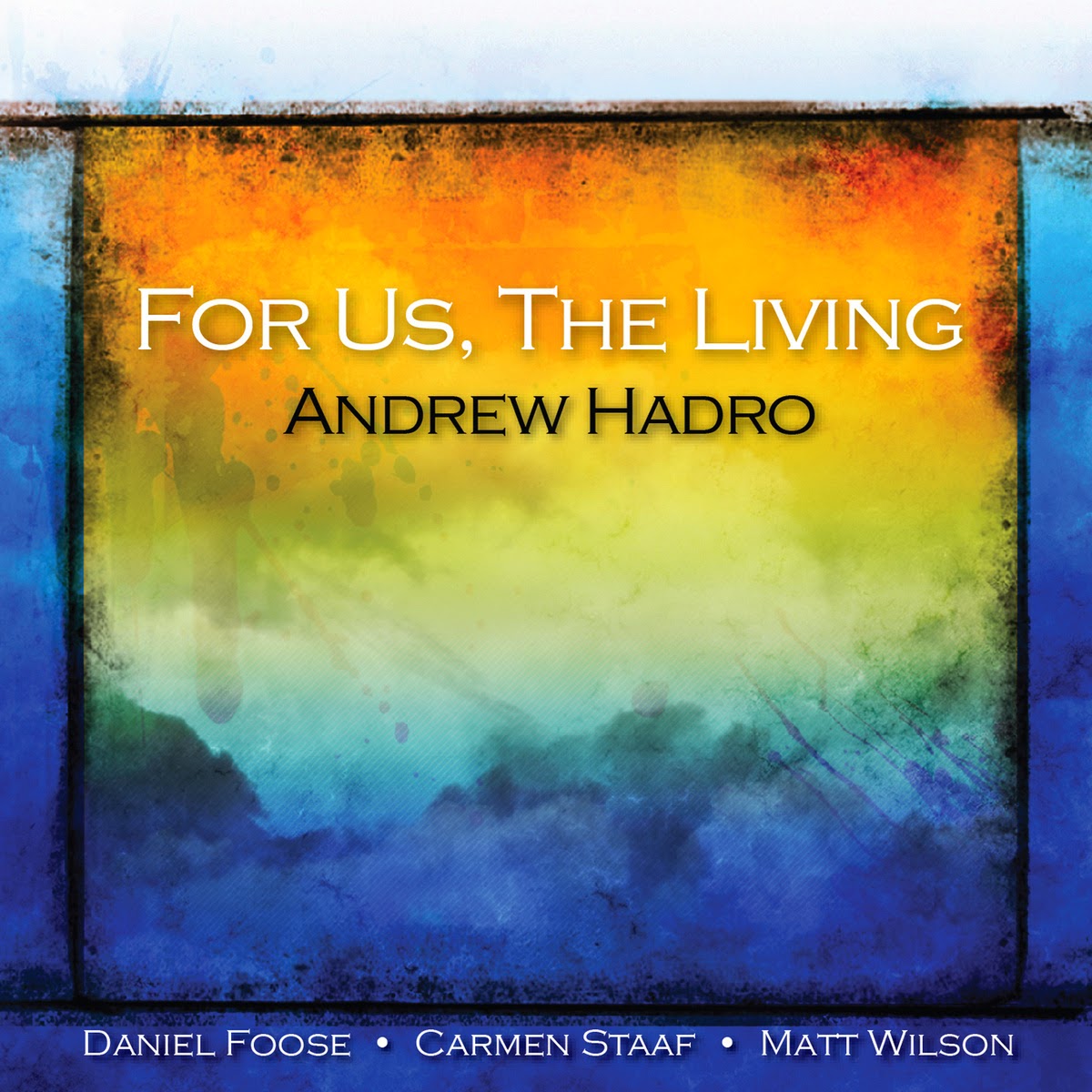 In the world of jazz, innovation is tradition. Baritone saxophonist and flutist Andrew Hadro embodies this idea on For Us, The Living, his debut CD as a leader. Hadro uses a classic quartet format, paired with fresh material by current composers, to show listeners his own particular vision of the music's future. The album features tunes by Maria Schneider, Julian Shore, Ryan Anselmi, James Davis, and Hadro himself, all current composers who are very much part of the 21st century jazz scene.

"This is my dedication to the musical giants on whose shoulders I stand," said Hadro. "Rather than reinterpret their works, I want to extend the timeline of jazz with new compositions and performances by the best living composers and musicians today."

Hadro's band is a powerhouse, starting with veteran drummer and bandleader Matt Wilson, whose unerring time and creative use of sound give the rest of the band a strong foundation for exploration. Pianist Carmen Staaf, recently accepted to the exclusive Monk Institute, shows again why she's one of the current jazz scene's most sensitive and inventive players. Bassist Daniel Foose works well with Wilson rhythmically and with Staaf harmonically. Together the quartet creates a rich sonic world for each of these compositions.

The album's title comes from President Abraham Lincoln's Gettysburg Address. Lincoln's speech, which marked its 150th anniversary in 2013, urged Americans to appreciate, honor and respect the unsung and fallen heroes, and to further their unfinished work and thus usher in a new era. Hadro felt it a fitting title for an album featuring current American composers who are carrying on the tradition of those who came before.
Wilson's majestic drumming opens Hadro's "Allegrecia," the first track. The tune then takes an introspective turn, led by Staaf's deep harmonies. Julian Shore's "Give" shows off the intense listening and interplay between all four members, particularly Staaf and Hadro, whose plaintive baritone sounds like a distantly heard voice in the night. Staaf is a standout on this record. Her fluid,

surprising solos are consistently engaging, and her harmonic choices are always just right. The band can cook, too, as shown on Hadro's "Bright Eyes," which Wilson propels like a rocket. Hadro's sweet baritone glides perfectly atop Wilson's drums on Ryan Anselmi's "Paola." Hadro has a gift for choosing songs that fit his own personality and those of his bandmates, perhaps none better than James Davis's "Cotton," which feels like a gospel take on Paul McCartney's "Blackbird." This is an album of real songs. Melodies, intention, concise statements, endings.

Andrew Hadro was born in Mexico City. He and his family moved to Brazil while he was still young, then to the East Coast of the U.S., and finally to the Chicago area. He began his studies on flute and soon found his way to the baritone saxophone, which became his primary instrument. Hadro attended the prestigious New Trier High School and performed with several of the school's DownBeat-award-winning ensembles. He then attended New York's New School for Jazz and Contemporary Music, where he was named salutatorian in 2007. He left soon after to tour and record with several of the school's founding jazz faculty.

Hadro has performed around the world with the Duke Ellington Orchestra, James Moody, the Bjorkestra, Tony Malaby, Chico Hamilton, and Junior Mance, among others. He is active in the New York music scene and involved in several projects, including performances with the Andrew Hadro Quartet, and tours with Junior Mance's quintet. He is on the faculty of the Litchfield Jazz Camp and maintains an active private lesson studio through the Lucy Moses School. He's the curator of JazzBariSax.com, a website dedicated to the baritone saxophone.

For Us, The Living was recorded May 28th & 29th, 2013 at Stadium Red by Tyler McDiarmid | Mixed and Mastered by Michael Perez-Cisneros | Co-Produced by Julian Shore | Artwork Images by Daniel Mottet