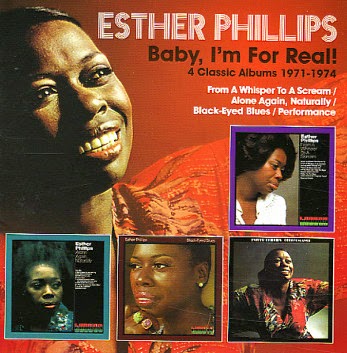 A huge chapter in the career of Esther Phillips – four albums for the legendary Kudu label, plus bonus tracks too! First up is From A Whisper To A Scream – one of our favorite-ever albums from Esther Phillips – an album that really helped her transform her sound for the 70s! The approach is a lot more jazzy than before – served up with a good dose of funk, thanks to arrangements from Pee Wee Ellis – fresh from his work with James Brown, but even more electrically-oriented here! Titles include an incredible cover of Gil Scott Heron's "Home Is Where The Hatred Is", plus "From A Whisper To A Scream", "Till My Back Ain't Got No Bone", "Your Love Is So Doggone Good", Scarred Knees", and "Baby, I'm For Real".

Alone Again is one of the deepest soul sets from Esther Phillips' 70s years on Kudu Records – a set with some nicely gritty grooves and a surprisingly earthy feel at times – especially when compared to some of her other albums of the time! Backings are by James Brown's old reedman, Pee Wee Ellis – and although there's some of the usual Kudu electric funk in the mix, there's also some deeper soul elements too – a vibe that's often a bit laidback and open, almost more Atlantic Records at points – which is a mighty good fit for Esther's wonderful voice! The album's got a great version of Bill Withers' "Use Me" that features a tasty break in the intro – and other titles include a great version of "Alone Again (Naturally)", plus the cuts "Let's Move & Groove", "Cherry Red", "Let Me In Your Life", and "You & Me Together".

Black Eyed Blues is next, and Pee Wee Ellis arranged the album, and gave Esther a nice little dose of funk that really helped her groove – getting out of the sad bag of her Atlantic recordings, and sounding hipper than anyone would have expected! The record features the great slow funk groover "Black Eyed Blues" – and other tracks include "I've Only Known A Stranger", "You Could Have Had Me, Baby", and "Too Many Roads".

Performance has a nicely dark undercurrent at times – a sound that's not as smooth as some of Esther's other Kudu albums from the 70s, with bits of R&B bubbling underneath the more contemporary arrangements. Backings are penned by Pee Wee Ellis and Gary King – and titles include the classic funky number "Disposable Society" – one of those great little groovers that never did anything for Esther at the time of its release, but which has really gotten rediscovered in recent years! Other tracks include "Doing Our Thing", "Living Alone", "Can't Trust Your Neighbor With Your Baby", and "I Feel The Same". CD features bonus tracks – "Brother Brother", "I Can Stand The Rain", and "What A Difference A Day Makes (single edit)".  ~ Dusty Groove