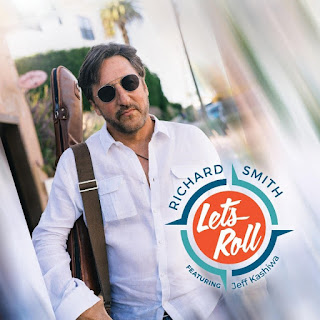 Last March, guitarist Richard Smith was in a battle for his life. Before the doctors and nurses administered the experimental infusions that he hoped would strangle the stage 3 cancer gripping his throat, his daily response to their inquiries asking if he was ready for the four-hour process that he went through for 45 consecutive days became an affirmation: “Let’s roll.” A year later and now cancer free, Smith is set to drop his first US single in five years, “Let’s Roll,” which he wrote with Billboard chart-topping guitarist Adam Hawley, who produced the uplifting track featuring saxophonist-flutist Jeff Kashiwa.

Shortly before Smith’s diagnosis, the former chair of the contemporary guitar department at the Thornton School of Music at USC’s former student, Hawley, sent a demo track of the single that goes for playlist adds on March 29 from Chillharmonic Media. “Let’s Roll” was to become Smith’s daily mantra before infusions.

“The clinical trial drug that I volunteered for was a daily four hours of intravenous infusion, as well as radiation and chemotherapy that drained my mojo to zombie levels every day. Fortunately, the drug is now in production and is a game changer,” said Smith, who lost 40 pounds during treatment and has an eight-inch scar on his neck from the surgery.

“Let’s Roll” previews Smith’s forthcoming 13th album, “Language of the Soul,” which he plans to drop in the Fall.

“The album title comes from a piece written by great South American poet Pablo Neruda, who I discovered while on tour in Argentina and have become a huge fan. The new album is a lively collection of pieces that I recorded over the last two years while living in Finland, Italy, Greece, London and while isolated here in LA. I wanted to get back in my ‘LA lane’ and working with Adam (Hawley) helped me get back in the musical headspace to produce music for an American audience,” said Smith who remains a full professor at USC.

Smith’s “SOuLIDIFIED” (2003) album spent 17 weeks in the top 10 in terms of airplay and his 2015 set, “Tangos,” spent more than five months in the top 10 of the indie and contemporary jazz charts. As a featured sideman and collaborator, Smith has recorded or shared the stage with contemporary jazz royalty, including Richard Elliot, Peter White, Kenny G, Dave Koz, Gerald Albright, Mindi Abair, Eric Marienthal, Brian Bromberg, Warren Hill, Everette Harp and Dan Siegel. Opportunities over the last ten years to perform, compose and record with international artists and at universities aboard afforded Smith the opportunity to combine his two loves.

“I can’t separate my passion for making music from my passion for teaching it. So, I committed to a musical life away from the States. I get summers off from USC, so I hop on a plane the day after classes and spend May to September abroad. My music has changed a lot, doing arrangements that suit European concert goers. However, when I met American actress Nancy Lee Grahn (General Hospital), I decided to return to full-time life in the United States and get back to my West Coast modern jazz roots.”

“A few songs from ‘Language of the Soul’ have political origins. A big part of songwriting history are songs of protest and struggle. We are in such turbulent times that as an artist, it is impossible to avoid the opportunity to share the inspiration and social commentary that such times provide,” said Smith.

It’s possible that Smith’s cancer experiences may inspire more music that will appear on “Language of the Soul.”

“A typical thing that cancer survivors say is that no one understands except the people who have been through it. That is so true, but it helps those who haven’t been through it to share some of the details – whether it helps them personally or one of their loved ones as they go through it.”