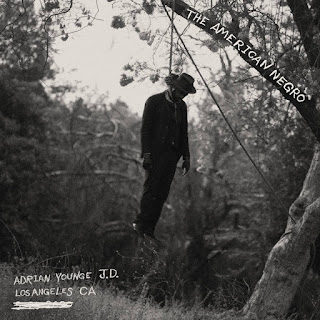 Adrian Younge has released his most ambitious and deeply personal project to-date. The American Negro is a multimedia project release in conjunction with Black History Month, and sees the Los Angeles-based multi-instrumentalist, composer and producer share an unapologetic critique detailing the systemic and malevolent psychology that afflicts people of color.

The American Negro is a powerful, multifaceted statement that reflects perennial injustices and serves to act as a lever of change during a time of mass disillusionment: an album for the people that details the evolution of racism in America. It is insightful, provocative and necessary in our fight for equality. “The American Negro is the most important creative accomplishment of my life. This project dissects the chemistry behind blind racism, using music as the medium to restore dignity and self-worth to my people,” notes Younge. “It should be evident that any examination of black music is an examination of the relationship between black and white America. This relationship has shaped the cultural evolution of the world and its negative roots run deep into our psyche.”

The American Negro is not for the faint of heart, including the album cover art–a recreation of “Lynching Postcards” that became very popular to celebrate the murder of African Americans at the hands of White Americans as vigilante justice at the turn of the last century, with no judicial reprisals; in addition, they served as warning signs against any person of color seeking to eradicate racial inequality. Modernly, death by asphyxiation is a tool Police officers have used in killing innocent Black Americans–the lynching of the Black Americans has to stop!

Created as a companion to The American Negro, Younge is also releasing his brand-new podcast Invisible Blackness with Adrian Younge. The Amazon Music-exclusive podcast documents the development and evolution of racism in America. Over four episodes and a series of extended conversations, Younge analyzes the Black consciousness of America with new historical parallels to the future and the past. As part of the podcast, Younge will be joined by fellow luminaries like Chuck D, Ladybug Mecca, Keyon Harrold, Michael Jai White and more to reveal, illustrate, and make visible the dominant ideologies embedded in America’s culture. Debuting February 4th on Amazon Music, fans can listen to the series trailer here (https://youtu.be/gqg9rk88e3A) and subscribe to the podcast here: http://www.amazon.com/invisible_blackness. Amazon Music customers can access a wide selection of podcasts including new Originals like Invisible Blackness with Adrian Younge in the Amazon Music app for iOS and Android, on Amazon Echo devices, and at music.amazon.com/podcasts.

Adrian Younge is a member of The Midnight Hour and has produced for entertainment greats ranging from Jay Z, Kendrick Lamar and Wu-Tang Clan. He’s composed for television shows such as Marvel’s Luke Cage (with Ali Shaheed Muhammad), and films including Black Dynamite. He owns the Linear Labs boutique record label and analog studio, and is co-owner of Jazz Is Dead. When he’s not working on scores for major studios or networks, he’s making albums that speak to his own artistry. For The American Negro, Younge not only wrote, but played every instrument of the album’s rhythm section; he also orchestrated a 30-piece orchestra and recorded them in his analog studio.

A true Renaissance Man, Younge wrote, directed, edited and composed the score for the upcoming short film T.A.N.–a narrative film that sees five fragile souls, confused and in a haze of consciousness and intolerance, enter an eerie dimension. Piece-by-piece, each person realizes their destiny, and the darkness they’ve left behind. The film will be available later this month via Amazon’s Prime Video and on the Amazon Music app. Look for more on the film soon.