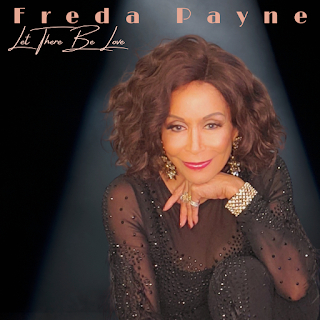 Singer, legend, Freda Payne pairs up with four of the other world's greatest singers of Jazz for a duets album. It is a classic jazz big band album. Featured on album with Freda are: Johnny Mathis, Dee Dee Bridgewater, Kurt Elling, Kenny Lattimore.

Internationally renowned singer, Freda Payne, known for her 1970's hit R&B Number 1 Gold Record, "Band of Gold," is releasing her first studio album in 5 years on April 16. The announcement was officially confirmed by Alain Franke Records who will be releasing this Jazz Big-Band album. This is Freda Payne's 26th album.

The album is big in scope, expense and very lush sounding. Song arrangements are by Grammy winner composer-conductor, Gordon Goodwin. It is an ambitious project to have an analog classic sound with live musicians, recorded in late 2019 by Producers Rodrigo Rios and Michael Goetz.

The idea was to get the Freda Payne sound with a real 30 piece orchestra and see what it would be like to pair her up with other great jazz singers in a series of newly arranged classic Jazz Standards songs from the American Songbook.

The other recording artists on, "Let There Be Love," are the veteran jazz greats: Johnny Mathis, DeeDee Bridgewater, Kurt Elling and Kenny Lattimore.

The recording was done in the famed Capitol Records Studio A, famous for its high ceiling, grand size and great acoustics - big enough to fit an entire orchestra.

The album features the 1958 cool jazz pop hit, "Let There be Love," re-arranged and morphed into a contempo/up-tempo jazz pop song with the classic sound of a traditional horn section and strings. Freda Payne and Kenny Lattimore wail on this one. On, "Moanin'Doodlin," Dee Dee Bridgewater with Freda sing two jazz classics cleverly mixed into one. 2021 Grammy winner of Best Jazz Vocal Album, Kurt Elling, duets with Freda on a cool revamped Gershwin classic, "Our Love Is Here To Stay." Freda Payne and Johnny Mathis are together in their cute and sexy duet with the full "Nelson Riddle-type" Big Band on, "They Can't Take That Away From Me." Executive Producer, Michael Goetz of Alain Franke Records says, "All the tracks on this album are hot and will get the listener up and want to dance."