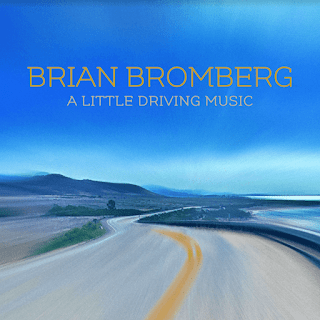 After nearly a year of being cooped up within the same four walls, it’s only natural that one’s thoughts might turn to the freedom of the open road. That’s certainly true of virtuoso jazz bassist and world-renowned producer Brian Bromberg, whose third pandemic-era release shrugs off the prevailing mood of COVID-era claustrophobia and political strife for A Little Driving Music, a fun, funky paean to cruising with the top down and leaving your troubles behind.

While countless musicians have spent the quarantine months in a state of limbo, the always-prolific Bromberg quickly figured out a way to continue making music while remaining socially distanced. Due out May 21, 2021 via Artistry Music/Mack Avenue Music Group, A Little Driving Music follows the bassist’s wide-ranging holiday album, Celebrate Me Home, and the remixed and remastered digital release of his stunning tribute album Bromberg Plays Hendrix.

“In one aspect it's been a weird, heartbreaking time to be a musician who just wants to play music with human beings, for human beings,” Bromberg laments. “On the flip side, I've been really fortunate. It's been a really positive, productive period because I've had nothing but time to sit in front of a computer or pluck my strings.”

“This is the hand you're dealt, so you make the most of it,” Bromberg says of the unusual circumstances under which the album was recorded. “Everything about how we do things has changed, but when you come to terms with that and accept it for what is, you can enjoy the process. Especially when you're dealing with a lot of talented people and state-of-the-art technology – it's amazing what you can do despite not being in a prime situation.”

No trace of that adverse situation can be heard as the album kicks off with “Froggy’s,” a carefree, high-spirited funk tune highlighted by a lively horn section emulating the chorus of frogs that often greets the composer at his Southern California home. Bromberg takes a blistering solo on piccolo bass, which could easily be mistaken for a shredding electric guitar. The baton is then picked up by Everette Harp’s vibrant turn on sax.

A diary entry for these strange times, “Quarantine” was the first track penned by Bromberg after lockdown commenced. The rest of the album was also composed in quarantine, with the sole exception of the title track – fittingly enough, as the freewheeling “A Little Driving Music” fills the listener with a sense of movement and freedom much missed over these solitary months. “That Cool Groovy Beatnik Jazz” is another self-explanatory title, conjuring the laid-back, finger-snapping groove of a classic BYOB hipster café (meaning Bring Your Own Bongos).

Both “Bado Boy!” and “Lullaby for Bado” are dedicated to a cat that Bromberg and his fiancée rescued from Barbados, a complicated tale that eventually involved the island’s Minister of Agriculture. (“It would be as if you wanted to rescue a cat and had to talk to the Vice President of the United States to do it,” Bromberg says incredulously.) The former tune, which features Barbados-born saxophonist Elan Trotman, reflects the feline’s playful spirit; the latter, pairing Bromberg’s emotional acoustic bass with the Dominican Republic strings, is an elegy for the lost cat.

“We knew he was sick, but we hoped he'd live a long time,” Bromberg recalls. “Unfortunately, he only lived a year, but he had a hell of a year living with us instead of being alone as a stray cat sick in the Caribbean.”

With an assist from Dave Koz, “Walking on Sunshine” reimagines the 80s classic in a jazz context, slower and funkier than the incessantly upbeat original. “After the year we've had – and, sadly, the year we're likely going to have – a little positive energy goes a long way,” Bromberg explains. “So, I wanted to record something with positive energy and uplift that also had that twist, that most recording artists might not have thought of doing.”

Short for Sagittarius, “Sag 5” is named for the December 5 birthday that Bromberg shares with saxophonist Darren Rahn, who guests on the track, melding sounds so harmoniously with the bassist that it lends a bit of credence to astrological synergy. Adding Andrew Neu on clarinet and Mitch Forman on accordion, “A Rainy Day in Paris” transports the listener to a café in the City of Lights as the weather turns gray outside. “If that song doesn't make you want to have a glass of wine and some cheese, I don't know what will,” insists Bromberg. “The only thing missing is a red and white checkered tablecloth.”

With Marion Meadows extolling the hopeful melody on soprano sax, “Peace” is Bromberg’s offering to the search for sanity in a contentious world. As he describes it, the tune is “the equivalent of a musical time out, suggesting that everybody just take a deep breath while the world and this country, in particular, is pretty upside down.”

The country-accented “Jedediah’s Gold” paints a sepia-tinged portrait of a Gold Rush miner and his stake in the Old West, while “The Sitting Room” luxuriates in the feeling of relaxing in a favorite, comfy spot at home. The greasy, slinky “Baton Rouge” detours down south for a bit of hot, sweaty, fun-in-the-sun funk with Nick Colionne laying down some down-home guitar licks.

“There's some heavier music on A Little Driving Music,” Bromberg concludes, “but for the most part it's a fun, positive energy record. There's nothing better than that Zen moment of listening to great tunes on the road, looking out the window at life. That's the vibe of it to me: I hope people just want to put it on in the car and crank it up.”