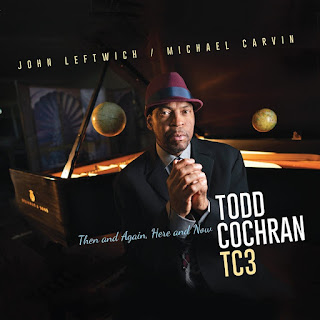 The creation of music as a collective art requires participants who are open and engaged. The essence of ensemble jazz music is the collaboration between elements, including sound and time and the musicians and audience. Pianist/composer Todd Cochran views these interchanges of energy and emotions as positive forces for change in the world. In his new album, Then and Again, Here & Now, set for June 11 release on Sunnyside Records, Cochran’s earlier explorations are folded into this fresh musical creation.

To assist him in his efforts, Cochran enlisted bassist John Leftwich and drummer Michael Carvin. Leftwich has been an important voice in the West Coast’s vibrant music scene for decades and was introduced to Cochran twenty years ago via Freddie Hubbard. The legendary drummer became a part of the pianist’s world even earlier through collaborations with Bobby Hutcherson. Together the Todd Cochran trio – TC3 – is a tremendously vibrant, cerebral and vividly emotive ensemble that breathes life into any piece they endeavor to touch.

Cochran’s musical interests have always been vast in their outlook, from the avant-garde to fusions of jazz and rock. Under the alias Bayeté, his sound can be heard on albums that push the bounds of genres, from Santana, Automatic Man, Peter Gabriel, and Joan Armatrading’s arena filling rock sounds to the explosively spiritual world of his own records. “It was a combination of learning about idioms outside of those with which I was most familiar, and the trajectory of a restless curiosity that pushed me to surmount the challenges of making music outside of my natural affinities. Playing different styles of music authentically rather than as an approximation overtook everything. Each musical idiom had its own aesthetic and particular alchemy” says Cochran. Though, the element that has never escaped Cochran’s work throughout his career has been the blues aesthetic tied to jazz’s legacy, which he re-embraces on Then and Again, Here & Now.

Then and Again, Here & Now presents a collection of stalwart jazz songbook compositions, expressively contemporized and poetically reimagined by Cochran and his trio. Cochran’s philosophy of the development of music through the passing of ideas from generation to generation through evolving syntax can be heard in the approaches that are taken on these pieces. Though experimenting and taking liberties with these classics, the trio remains responsible as keepers of the flame and protectors of the blues vernacular.

From the opening of Romberg and Hammerstein’s “Softly, As In A Morning Sunrise,” the trio’s command of the piece’s inherent swing can be interspersed with creative rhythmic experimentation. A variety of approaches can be heard from piece to piece, especially on a pair of Gershwin pieces with “A Foggy Day” morphing from ballad to mid-tempo and “I Got Rhythm” in pointillistic swing. Interstitials connect and introduce a number of pieces in a thoughtful fashion akin to live performance, including Dave Brubeck’s “The Duke,” which flows expansively like a lazy river. “My approach is to accentuate its eloquence and enhance the myth” says Cochran.

Ellington’s “Don’t Get Around Much Anymore” finds a curious pull between the classicism that the song inspires and Cochran’s playful bending, while a solo bass meditation leads into a brilliantly woven version of J.S. Bach’s “Prelude XX” from Book II of the Well-Tempered Clavier highlighting Cochran’s continued classical inspiration. “After the theme is stated we segue into improvisations around the idea of climbing up and climbing down. Modeling real-life and the reality that we’re continually modulating in one direction or another” says Cochran.

Vernon Duke’s “April In Paris” inspires a sweeping but soft touch from the trio until Leftwich’s unaccompanied bass “Between Spaces - Interstitial” leads to a percussively propulsive take on Kaper and Webster’s “Invitation,” as Carvin, a masterful archetype of empathetic rhythming, imaginatively sets the tone. “It’s played as a song without words, I think about the emotion of finally arriving at the perfect moment to extend an invitation to someone long imagined or hoped for” says Cochran.

An impressionist touch introduces Michel Legrand and Jacques Demy’s “You Must Believe in Spring,” a heart stopping ballad performed solely by Cochran. Monk’s spritely “Bemsha Swing” follows in short order followed by a wistful take on Bobby Hutcherson’s jazz waltz, “Little B’s Poem,” poignantly played by the trio with brilliant solo turns by all. The recording concludes with the resonant “Then and Again, Here & Now,” a brief recapitulation of the elements that brought this recording together: fellowship, history and hope.

Todd Cochran has made it his life’s work to bring love and understanding to the world. The method he endeavors to accomplish this is through the communal language of improvisation and jazz. Then and Again, Here & Now encapsulates Cochran’s desires in a tangible and invigorating way.

Growing up, Cochran found a middle ground between the dimensions of the intellectual and spiritual when he discovered jazz music. His parents and grandparents were highly educated and motivated him to become the same. That led to his serious investment in classical piano study; performing and entering competitions as early as when he was just eight years old. His cousin introduced him to jazz at 13 and Cochran found a parallel, magnetizing pulse. He began to revisit his parents’ collection of Duke Ellington, Oscar Peterson and Ahmad Jamal recordings, transcribing and analyzing them so he could apply their lessons to his own music. It wasn’t long before Cochran was reaching out to local jazz leaders.

A San Francisco native, formative school days in the 60s, college and coming-of-age in the 70s, Cochran is a product of the dynamic convergence of attitudes and socio-cultural revolution. His hometown was frontline at a pivotal time in American music history and the visionary principles of the era influenced his worldview and the trajectory of his pursuits. At just 17 years old, he found himself performing alongside the likes of jazz masters John Handy, Mike Nock, and later, Bobby Hutcherson, Woody Shaw, Rahsaan Roland Kirk, Herbie Hancock, Julian Priester, and Eddie Henderson.

Though his own music would branch out dramatically from his earliest jazz grounding, Cochran always remained in touch with the blues element of the music. Now after a ten-year hiatus from recording while nurturing his son into adulthood, Cochran has returned to the music that has given him so much joy and that he feels is necessary to reinvest in for the betterment of society.