Dan McCarthy - A Place Where We Once Lived 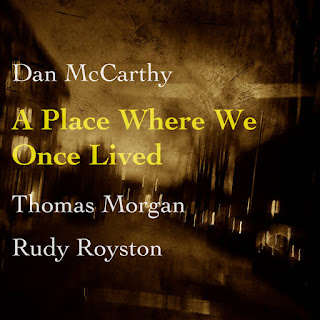 Recorded in Brooklyn, NY the day before permanently returning to Toronto, Dan gathered with two of the most in-demand improvisatory musicians in New York to present an introspective look at his 15 years living in the jazz Mecca of the world.

“A Place Where We Once Lived” is a reflective and brooding collection of eight impressionistic original compositions, three “short stories” which act as interludes, and one cover of the beautiful Steve Swallow piece “I’m Your Pal."  Though each musician is accomplished individually, the result of this recording is certainly greater than the sum of its parts, and exemplifies the definition of musical unity.

Dan McCarthy is a Canadian jazz vibraphonist based in Toronto. After graduating top of his class from the prestigious jazz program at Humber College, he moved to New York City in 2004, giving him the chance to play and record with some of the top jazz musicians in the world, such as George Garzone, Myron Walden, Ari Hoenig, and Gerald Cleaver.  In March 2019, Dan’s first major-label release “Epoch” came out on Origin Records. The record features jazz icon Steve Swallow on bass, as well as giants Ben Monder on guitar and Mark Feldman on violin. It received glowing international reviews.