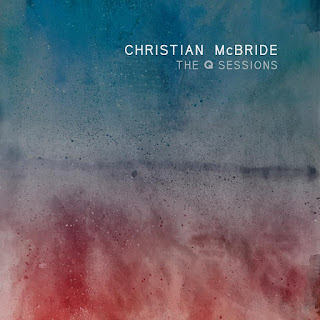 McBride visited NYC’s Power Station earlier this year to record three start-to-finish Hi-Res songs commissioned by Qobuz. The project was created with top-notch equipment at 24-bit/ 192kHz quality, and the final product streams and downloads with the exact same sound, tones and touches in which it was first recorded.

With no digital compression or downgrading involved, The Q Sessions is the first in a new series of Qobuz exclusives designed to transport listeners directly to the studio and show the difference Hi-Res recording, production, and listening can make.

The EP features three McBride performances, played in a quartet with saxophonist Marcus Strickland, drummer Eric Harland, and guitarist Mike Stern. Comprised of one blues improv, one standard and one new original commissioned by Qobuz ("Brouhaha," a song inspired by the then-recent passing of Chick Corea), The Q Sessions was custom-designed for the jazz fans who turn to Qobuz for the best quality sound. This EP joins Qobuz’ already established catalog of exclusive content – expert penned “panorama” interactive essays, artist-created playlists, liner notes and lyric booklets – to add to the platform’s reputation for the best listening experience in the field.

Read more about The Q Sessions and the McBride/Qobuz partnership HERE at WBGO, where you can take an exclusive Hi-Res listen to the new "funk-fusion workout" “Brouhaha” right now, "in the same 24-bit / 192kHz quality with which it was captured in the studio."

“What a pleasure it was to put together a special group featuring one of my favorite guitarists of all time, Mike Stern. It was a great day in the studio with Mike, Marcus and Eric – not only jamming a couple of tunes, but to also record a new original of mine, 'Brouhaha,'" said McBride. "I’m thrilled we captured these performances in Hi-Res audio and can deliver them to the listener without compromise, and I look forward to more with Qobuz.”

Dan Mackta, US Managing Director of Qobuz, said, “Seeing the guys create this incredible music right before my eyes in the historic Power Station Studio A was a once-in-a-lifetime experience. Knowing that everyone can have that same studio quality experience by listening on Qobuz makes it even better."

Founded in 2007, a pioneer of high-quality sound, Qobuz is the French music streaming and download service that meets the needs of demanding music lovers and audiophiles. Available in 18 countries around the world, in Europe, the United States, Australia, and New Zealand, Qobuz offers an exceptional range of exclusive editorial content written by a team of experts. With its catalog of more than 70 million tracks, Qobuz also has the richest choice of high-resolution (Hi-Res) references on the market. Qobuz is the only multi-genre platform to achieve Hi-Res certification - a label awarded by the Japan Audio Society (JAS). For more information: qobuz.com

Christian McBride is a seven-time GRAMMY® Award-winning bassist, composer and bandleader. McBride is the Artistic Director of the historic Newport Jazz Festival, New Jersey Performing Arts center (NJPAC) and the TD James Moody Jazz Festival, and the National Jazz Museum in Harlem. Christian is also a respected educator and advocate as the Artistic Director of Jazz House Kids and the Jazz Aspen Snowmass Summer Sessions. In addition to consistent touring, McBride hosts NPR's “Jazz Night in America” and "The Lowdown: Conversations With Christian" on SiriusXM. Whether behind the bass or away from it, Christian McBride is always of the music. From jazz to R&B, pop/rock and hip-hop/neo-soul to classical, he is a luminary with one hand ever reaching for new heights, and the other extended in fellowship—and perhaps the hint of a challenge—inviting us to join him.