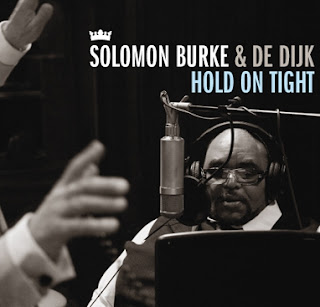 Solomon Burke recorded his final album in October 2009 in Brussels, Belgium with the Dutch band De Dijk.  One year later, on October 10th, the "King of Rock 'n' Soul" died on his way to Amsterdam where he was to perform with De Dijk.  Now that masterful album, which was issued in Europe prior to his passing and reached platinum status, debuts in the U.S.  Hold On Tight (Verve Forecast), which will be released March 22, 2011, from Solomon Burke & De Dijk, marks the legendary singer's last musical testament.

Burke first met De Dijk when they shared a stage in the Netherlands in 2007.  The quintessential Dutch rock and soul band (eight members including a horn section) is considered to be one of the most important Dutch bands of the past 25 years but had never recorded in English.  But with their musical hero Burke taking on lead vocals and co-writing the music and lyrics of every song but "Text Me," they recorded an album in English for the first time.  Also featured is music icon and long-time friend of Burke, Jools Holland, on piano for "What A Woman."

Burke and De Dijk worked together on Hold On Tight at the ICP studios in Brussels for six days. The (originally Dutch) songs of De Dijk were translated in English and re-recorded with Burke for this special occasion including the band's hit songs like Hold On Tight (Hou me vast), What A Woman (Wat een vrouw), Good For Nothing (Nergens goed voor), Seventh Heaven (Zevende hemel), I Gotta Be With You (Ik kan het niet alleen), and My Rose Saved From The Street (Mijn van straat geredde roos).

In the mid-'60s, Burke scored a series of R&B and pop hits for Atlantic Records, including his signature R&B #1 "Got To Get You Off Of My Mind," R&B #2 "Tonight's The Night" and classic "Everybody Needs Somebody To Love."  Enormously influential not only with his music but also his stage presence, Burke always performed wearing a regal robe and sporting a crown.  In the 2000s, he enjoyed a revival of interest, in 2003 winning a Grammy for Don't Give Up On Me.  Two years earlier, he had been inducted into the Rock and Roll Hall of Fame, a fitting honor for a man who bridged gospel, blues and R&B, the very foundations of rock and roll.

Hold On Tight Tracklisting:
Hold On Tight
My Rose Saved From The Street
What A Woman
No One
More Beauty
I Gotta Be With You
Seventh Heaven
Good For Nothing
Text Me
Don't Despair
The Bend
Perfect Song