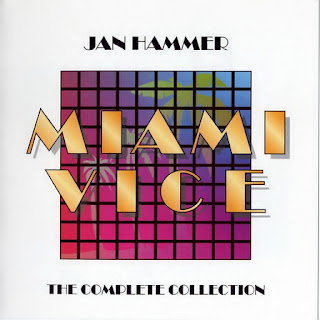 Miami Vice: The Complete Collection is finally available for digital download. The classic compilation, originally released in 2002 by One Way Records, has been out of print for five years and has become a highly sought after item among avid fans of Hammer and of the landmark television series. The CD, when available from third party sellers on eBay and Amazon, has sold for prices ranging from $250 for used to over $500 for "new" copies. For a limited time, Miami Vice: The Complete Collection can be exclusively downloaded from the official Jan Hammer website for $19.98, with select individual tracks also available for download for ninety-nine cents each. It's also available at Amazon and eMusic.

Miami Vice: The Complete Collection is more than a compilation of 1985's Miami Vice and 1986's Miami Vice II.. While Miami Vice: The Complete Collection does in fact include all seven of Jan's original compositions featured on the two soundtracks, it also includes assorted tracks from three other albums: Miami Vice lll (which was a 1988 Europe only release), Jan’s Escape From Television and Snapshots 1.2 , as well as twenty-two compositions written for the show and that he recorded specifically for this album in 2002, plus a bonus track recorded in 2004. Included with the full album download from Jan's website is a PDF of the twelve-page booklet written for the original two-CD release.

Jan Hammer's musical career is as firmly rooted in the fundamentals of classical, jazz and rock as it is committed to the future of electronics, synthesized sound, the possibilities of interactive media, television, film and animation. His walls are lined with Grammy awards and gold and platinum plaques from around the world. His name is found on scores of recordings spanning the 1970s to the '90s -- solo albums, collaborations with the Mahavishnu Orchestra, Jeff Beck, Al Di Meola, Mick Jagger, Carlos Santana, Stanley Clarke, Neal Schon, Elvin Jones and many others.

Jan's association with Miami Vice began in the fall '84, when the producers of the show enlisted him to begin the rigorous weekly schedule of scoring the series. In 1985, "Miami Vice Theme" (MCA Records) hit number one on the Billboard Hot 100 Singles chart and, in so doing, became the first and only original version of an instrumental theme for television to reach this pinnacle of success. "Miami Vice Theme" became a top 5 international hit and earned Jan two Grammy awards: “Best Pop Instrumental Performance” and “Best Instrumental Composition.” The Miami Vice soundtrack album stayed #1 on the Billboard Top Album chart for 12 weeks, hitting quadruple-platinum in the U.S. alone, with worldwide sales in excess of 7 million as of this writing.

Miami Vice II as well as Jan's Escape From Television were both million-selling albums for Jan in 1987, both featuring “Crockett’s Theme,” which had become a smash European hit, topping the charts in six countries. "Crockett's Theme" has been included on over 100 CD compilations in addition to Escape from Television, including Virgin's double-platinum Pure Moods. Recently, Hammer collaborated with urban vocalist TQ on a rap version, which was the #1 downloaded track for several weeks on iTunes in Europe.