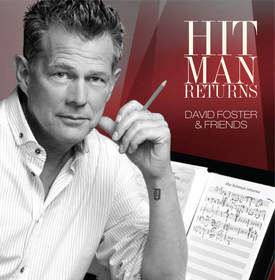 Hitman David Foster and the hugely successful Foster & Friends franchise has returned with another extraordinary night of music which is thrillingly captured on his latest DVD and CD "The Hitman Returns: David Foster & Friends." Which was released on 143/Reprise Records on March 1st. . PBS is now simultaneously broadcasting the show beginning in early March as part of their Great Performances Series. "Hitman Returns" was filmed before a sold out crowd last year at the Mandalay Bay in Las Vegas. The lineup of talent lead by Foster as maestro of ceremonies includes performances by Seal, Donna Summer, Martina McBride, Earth, Wind & Fire, Natalie Cole, Ruben Studdard, All-4-One,"Glee" star Charice, Chaka Khan, Jackie Evancho, Lara Fabian and other artists whose careers have been touched by Foster, a 15-time Grammy winning producer and songwriter. The first David Foster & Friends Hitman Show on PBS was one of the highest rated pledge shows of the last decade and was viewed by millions of fans. David Foster's four decade career includes writing and producing with a who's who in music including Whitney Houston, Barbra Streisand, Michael Bublé, Josh Groban, Jennifer Holiday, Natalie Cole, Kenny Loggins, Madonna, Michael Jackson, George Harrison, Diana Ross, Sonny & Cher, Rod Stewart and scores of others. The Hitman also discovered, signed and produced Michael Bublé and Josh Groban whose CDs have sold well over 20 million copies apiece. He is currently producing "America's Got Talent" runner up -- 10 year old Jackie Evancho as well as writing a Broadway musical about Betty Boop. The success of the Foster & Friends franchise also includes sold out tours around the world. "This turned out to be one incredible show. I was thrilled to be able to get some of my very favorites on this go round who weren't free last time out including Earth, Wind & Fire and Chaka Khan. There were so many magic moments that night. I'm especially proud of the terrific combinations of talent including a medley with Chaka, Seal and Michael Bolton, a breathtaking duet with Natalie Cole and Ruben Studdard and a standout performance by Charice, Ne-Yo and Robert Randolph. And of course, accompanying the great Donna Summer on keyboards for 'Last Dance' brought me right back into the studio when we first recorded the song," commented Foster about the show. Once of the highlights from the show/CD is the duet between Donna Summer and Seal, where they sing Unbreak My Heart/Crazy/On The Radio – simply irresistible!
Now word comes to us that the enormously successful Foster & Friends Hitman show is returning to Las Vegas for a series of shows at the Mandalay Bay Events Center with the first two performances scheduled for Saturday, Oct. 1st and on Thanksgiving Weekend Friday, Nov. 25th. Tickets are scheduled to go on sale in May. Foster, the multi-talented 16-time Grammy winning producer, songwriter and maestro of ceremonies will once again host a lineup of talent including a return visit by show stopping “Glee” star Charice. His Mandalay Bay shows and the national tour of Foster & Friends previously included performances by Earth Wind & Fire, Jackie Evancho, Donna Summer, Andrea Bocelli, Seal, Chaka Khan, Natalie Cole, Josh Groban and scores of others. “I love bringing all different sorts of talent together on stage for one night. These upcoming Foster & Friends shows will continue the tradition of one big party along with exciting combinations of artists performing together,” commented Foster. "In a dizzying showcase, David Foster shows he is the rare music genius who can summon the greatest stars of both past and future generations," raved John Katsilometes from the Las Vegas Sun about the Hitman's previous Vegas show. The original "Hitman" show broadcast from Mandalay Bay was one of PBS' most successful pledge shows. Foster, who is scheduled to appear on The Today Show on Wednesday, March 9th also will be visiting local PBS stations nationwide where fans will have the opportunity to make a pledge to their local station during the broadcast. Premiums will include the new DVD/CD and tickets to one of the "Hitman" Las Vegas shows.Check your local listings for a schedule of airtimes for the "Hitman Returns: Foster & Friends" "Great Performances" show on PBS. For more information on David Foster, go to www.davidfoster.com
Posted by Jazz Chill at 11:27 AM

This DVD captures the true genius of David Foster. Until you watch this concert footage, one would never imagine the vast scope of his accomplishments; from writing songs for Barbara Streisand, to Josh Groban and Peter Cetera and Kenny G, many of whom showed up (and performed) in this wonderful and memorable concert, the sound and video quality of which is absolutely PERFECT!! The only possible improvement would be to actually attend one of his "LIVE" shows in person. I strongly recommend this DVD to anyone who enjoys the music of yesterday and today because somewhere; somehow; David Foster has his talent entwined in them all.