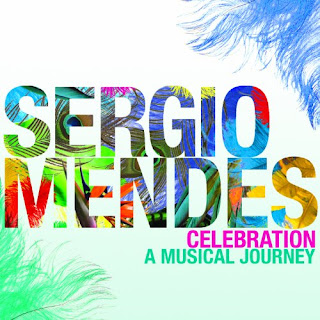 Sergio Mendes is about to be celebrated with his first ever career retrospective. Marking the 50th anniversary of his debut album, the two-CD Celebration: A Musical Journey (Emarcy/Verve), released 4th April, 2011, brings together more than three dozen selections spanning the entire career of the master of the bossa nova beat. The collection ranges from the classic "The Look Of Love" to recent collaborations with will.i.am and The Black Eyed Peas ("Mas Que Nada" is featured on the soundtrack to the 3-D animation feature RIO premiering April 15) to new recordings guesting Siedah Garrett and Ivete Sangalo. Celebration: A Musical Journey's earliest tracks were culled from 1961's Dance Moderno and groups Bossa Rio and the Sergio Mendes Trio. But it was Sergio Mendes and Brasil '66 which sparked global stardom. Performing "The Look Of Love" at the 1968 Oscars, their version went Top 10, quickly followed by the hits "The Fool On The Hill" and "Scarborough Fair." Enjoying immense popularity, Mendes added soul and funk to his jazz and pop, but always with a Brazilian rhythm. In the '80s, he scored with the Adult Contemporary #1 and pop Top 10 "Never Gonna Let You Go" and in 1992 won a Grammy for Brasileiro. From the 60s to now, Mendes and his cool factor is ever present. In 2006, his CD, Timeless, spotlighted hip-hop artists, including The Black Eyed Peas with a re-recording of early gem "Mas Que Nada" alongside Gracinha Leporace, Mendes' wife. 2008's Encanto found neo-soulster Ledisi and Spanish-language favorite Juanes as guests. Adding new recordings with Sangalo and Garrett, among them a remake of "The Fool On The Hill," Celebration: A Musical Journey brings up to date the extraordinary career of Sergio Mendes.


Tracklisting:
CD1
Outra Vez
Garota De Ipanema
So Danco Samba
Mas Que Nada
Going Out Of My Head
Constant Rain
Night And Day
The Look Of Love
So Many Stars
The Fool On The Hill
Scarborough Fair
(Sittin' On) The Dock Of The Bay
Pretty World
Wichita Lineman
Norwegian Wood
Masquerade
What The World Needs Now Is Love
Pais Tropical
Viramundo
After Sunrise
Promesa De Pescador