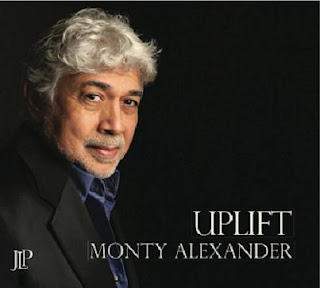 Jamaican jazz piano man Monty Alexander is acclaimed the world over for his seemingly extraterrestrial technique and sublime, heartfelt swing. Now with the release of his Jazz Legacy Productions debut Uplift, the pianist opens his personal concert archives to eager listeners everywhere, for an unforgettably riveting recorded affair. "Music is a healing force," Alexander says, who is joined by bassist Hassan Shakur, drummer Herlin Riley, as well as drummer Frits Landesbergen (on one track). "My hope is that by the end of a concert, and by the end of this album too, everybody will be taken with a feeling of uplift. That's what I always want to do." Featuring performances from Alexander's acclaimed live concerts over a three-year period, Uplift includes tracks the prodigious pianist has made his own over a storied, fifty-year career. From heartfelt renditions of standards like "Come Fly With Me" and "Body And Soul," to affecting originals like "Renewal" and "Hope," the album grooves hard and wide, much like Alexander himself. "I like to paint a rainbow of many emotions during a program," Alexander says. "You'll hear me play some blues with a good, old backbeat like 'One Mint Julep," and then I play "Django," which is a very reverential piece to me, having known so many of the musicians associated with it. For me, almost everything I play has a personal reference."
Alexander was born in Kingston, Jamaica and felt the gravitational pull of music at an early age. "When I was a kid in my Country, I used to hear the folk bands play Calypso music and other songs made popular by people like Harry Belafonte," Alexander explains. "Every time I came into contact with the musicians playing that music, there was always joy. And that was my whole experience with music and what led me to be a musician in the first place." Self-taught and unable to read traditional music notation, Alexander's seemingly unorthodox approach to the piano would not prevent him from attaining widespread global acclaim. He would make musical waves in his homeland first, (leading the group Monty and The Cyclones), and soon after, his two-fisted piano pyrotechnics would send him into the musical stratosphere, performing and/or recording with legendary artists like Frank Sinatra, Milt Jackson, Ray Brown, and countless others. A commanding career as a solo artist would soon follow, with Alexander recording over sixty albums as a leader himself, and anchoring countless tours to support them.


Uplift finds Alexander at the peak of his creative form, with the kind of musically adventurous set the esteemed pianist's concerts are known for. The album opens with a swinging nod to Frank Sinatra on the Jimmy Van Heusen/Sammy Cahn standard "Come Fly With Me," with Alexander's technical tenacity on full, recorded display. "That tune takes me right back to Frank Sinatra sitting in the back room at Jilly's when I was playing piano there at the age on nineteen, he says. "I like to tell people that I'm really a saloon piano player at heart." Other arresting album tracks include the scintillating, shuffle-fied "One Mint Julep," and a stride-meets-Monk take on "Sweet Georgia Brown," with a nod to two of Alexander's musical mentors. "The real heroes on that tune for me were Nat "King" Cole and Oscar Peterson," he explains. "Nat Cole had a real simultaneously hot and cool style in his fingers, and Oscar Peterson's mastery of the piano, powerful rhythm and full orchestral approach was very effecting to me." Known for his ability to leap tall chord changes at breakneck speeds, Alexander surprises on Uplift with a healthy dose of musical variety as well. A mournful reading of John Lewis' venerable jazz ballad "Django," (complete with mid-song swing interlude), a masterfully-modulating, waltz-like rendition of the jazz staple "Body and Soul," and nods to his Jamaican homeland on Calypso-flavored tracks like his own "Home" and Blue Mitchell's "Fungi Mama," round the album out with fire-filled flair.
montyalexander.com
Posted by Jazz Chill at 7:30 AM