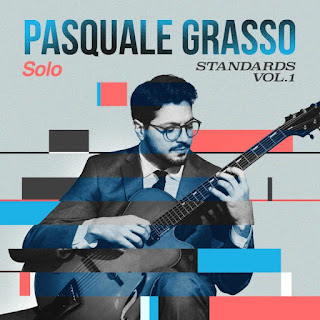 It was the kind of endorsement most rising guitarists can only dream of, and then some. In his interview for Vintage Guitar magazine’s February 2016 cover story, Pat Metheny was asked to name some younger musicians who’d impressed him. “The best guitar player I’ve heard in maybe my entire life is floating around now, Pasquale Grasso,” said the jazz-guitar icon and NEA Jazz Master. “This guy is doing something so amazingly musical and so difficult.

“Mostly what I hear now are guitar players who sound a little bit like me mixed with a little bit of [John Scofield] and a little bit of [Bill Frisell],” he continued. “What’s interesting about Pasquale is that he doesn’t sound anything like that at all. In a way, it is a little bit of a throwback, because his model—which is an incredible model to have—is Bud Powell. He has somehow captured the essence of that language from piano onto guitar in a way that almost nobody has ever addressed. He’s the most significant new guy I’ve heard in many, many years.”

As he’s done with many rising jazz stars, Metheny later invited Grasso over to his New York home to jam and share some wisdom. He’s since become a generous presence in Grasso’s life, and his assessment of Grasso’s playing is—no surprise—spot-on. Born in Italy and now based in New York City, the 30-year-old guitarist has developed an astounding technique and concept informed not by jazz guitarists so much as by bebop pioneers like Powell, Charlie Parker and Dizzy Gillespie and the classical-guitar tradition.

His new digital only EP series, available beginning on June 28 from Sony Masterworks, showcases Grasso in the solo guitar format, where his intensive studies of both the masters of bebop and classical guitar technique meld into a signature mastery that is, remarkably, at once unprecedented and evocative. The approach of the releases echoes the changing landscape in the industry, allowing a prolific recording artist to release a multitude of material over the course of an extended period of time.

"Although there are significant drawbacks to the music industry's shift toward streaming, there are also great opportunities,” says producer, manager and Sony Masterworks A&R Consultant Matt Pierson. “When an artist’s creative impulses are very active, it’s possible to record and release material in a more progressive way, feeding listeners music on a much more consistent basis. In the case of Pasquale, since he’s such a brilliant solo player with so much repertoire already under his fingers, we cut 50 extraordinary tracks. Since I find his playing to be very addictive, my hope is that when people get hip to him, they’ll also get hooked, and we can deliver a flow of a variety of material over the course of a year."

But whom does it evoke? After a surface listen, Joe Pass and his essential Virtuoso LPs might come to mind. Now listen again. The sparkling, immaculately balanced tone; the tasteful tinges of stride and boogie-woogie rhythm; the stunning single-note lines that connect his equally striking use of chordal harmony—for Grasso, great solo arranging equals Art Tatum.

Many serious guitar heads have been hip to Grasso for a while now and are aware of his jaw-dropping online performance videos, his beautiful custom instrument -- built in France by Trenier Guitars -- and his early career triumphs. In 2015, he won the Wes Montgomery International Jazz Guitar Competition in New York City, taking home a $5,000 prize and performing with guitar legend Pat Martino’s organ trio. Last year at D.C.’s Kennedy Center, as part of the NEA Jazz Masters Tribute Concert, Grasso participated in a special performance to honor Pat Metheny, alongside his guitar-wunderkind peers Camila Meza, Gilad Hekselman, Dan Wilson, and Nir Felder.

These days, Grasso teaches and maintains a packed gig schedule around New York, including frequent solo performances at the popular Greenwich Village haunt Mezzrow, where a regular Monday-night gig allowed him to develop his solo-arranging skillset. Not that Grasso thinks his work is done. “All [of the musicians I love are] inspiration for me to get new ideas and form my style, because it’s still growing,” Pasquale says. “And it’s gonna be growing until the day I die.”

His new Sony Masterworks EPs showcase his sweeping abilities in the most intimate possible setting. Here you can experience his lifetime of listening and of challenging himself to transcend a bar set by Art Tatum so many decades ago. The following EPs will be released digitally beginning in June, and additional EPs are slated for future release, including Pasquale exploring the works of Duke Ellington, Bud Powell and Charlie Parker.

Solo Standards Vol. 1 – Available Digitally: June 28, 2019
This collection of some of Grasso’s best-loved standards kicks off with “Just One of Those Things,” a tune he felt compelled to tackle after hearing Bud Powell’s dauntless solo rendition. “This Time the Dream’s on Me” is one of the first standards Grasso ever learned, after hearing it on a live recording featuring Powell and Charlie Parker; it was also the go-to show opener for the bands he co-led with his brother, alto saxophonist Luigi Grasso, while growing up in Italy. Pasquale chose “All the Things You Are” so that listeners might be able to gauge his trademarks on this most standard of jazz standards, and because it’s one of his brother’s favorite tunes (and, of course, for Charlie Parker). “Dancing in the Dark” finds inspiration in Art Tatum’s sterling solo version. “Tea for Two” is a nod to both Tatum and Barry Harris, who uses the number as a staple of his concert repertoire.

Solo Ballads Vol. 1 – Available Digitally: August 23, 2019
“The way I approach ballads,” Grasso explains, “is I try to learn the story of the song with the lyrics, even if I don’t remember all of the lyrics, because English isn’t my first language.” After that, the virtuoso says, he simply tries to relax and tinge his performance with the easygoing gait of stride piano. Here Grasso takes on “Body and Soul,” one of his father’s favorites and a tune he first remembers hearing as performed by Dexter Gordon in the film ‘Round Midnight; the Art Tatum tributes “These Foolish Things” and “Over the Rainbow”; the deceptively demanding “Ev’ry Time We Say Goodbye”; and “Someone to Watch Over Me,” yet another eulogy of sorts for his hero Bud Powell, who recorded a heartrending trio version in the mid-’50s.

Solo Monk – Available Digitally: October 11, 2019
As with most of his musical passions, Grasso became a Monk convert while still a child, after his father played him a record—in this case The Unique Thelonious Monk, a 1956 trio session featuring Oscar Pettiford and Art Blakey. Monk’s playing—the bluesy, propulsive architecture of his solos, the percussive stomp of his comping—reminded the young guitarist of one of his biggest heroes (and rare six-string influences), Charlie Christian. Since then, Grasso has found in Monk’s music an endless store of harmonic and rhythmic challenges, which he’s more than happy to meet here on “Epistrophy,” “’Round Midnight,” “Ruby, My Dear,” “Criss Cross” and “Off Minor.” “There isn’t a lot more to say,” Grasso admits, chuckling. “It’s just genius music.”