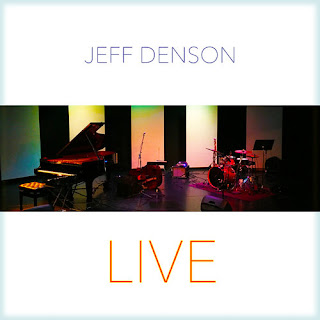 Internationally acclaimed bassist, vocalist and composer Jeff Denson-a musician of high (and steadily increasing) renown in the jazz world-has embarked upon what will be among the most bountiful and consequential years of his career. 2019 will see the release of two new and very different recording projects from the prolific musician, along with other releases on his Ridgeway Records label. In addition, Denson will maintain his busy schedule of tours and live performances as well as ongoing work as full professor at the California Jazz Conservatory (CJC)-to which, in the fall, he will also add the role of Dean of Instruction.

The first new album Jeff Denson Live, his seventh recording as a leader and first live album, is slated for a May 17 digital-only release via Ridgeway Records. Live was recorded at the CJC with a superlative band, including saxophonist Lyle Link, pianist Dahveed Behroozi and drummer Dillon Vado; it continues his development toward giving his formidable vocal prowess (as documented on 2018's Outside My Window) equal prominence with his remarkable bass playing.

"After Outside My Window came out, I took my quartet all over the country, and I was loving the pursuit of singing along with playing," Denson says. "The chemistry in the band kept growing in a really great way, and that's when I decided, 'Okay, I want to do a live album.' I love working in the studio, but live, we extend things and take a lot of risks-and I don't worry about track lengths. We let it go wherever it's gonna go."

Live features five of Denson's original compositions, along with scintillating covers of songs by Jeff Buckley, Abbey Lincoln, Peter Gabriel and the Beatles.

Denson's second release in 2019 will be a studio collaboration with superb French guitarist Romain Pilon, a friend of Denson's from their days together at Berklee College of Music, now based in Paris; and iconic, jazz drummer Brian Blade, one of Denson's longtime heroes. Between Two Worlds is due for release on October 25, 2019, also on the Ridgeway label. The group plans a US tour the last week of August, with more dates in February 2020.

An admirer of Blade's work for two decades, Denson finally got to meet and play with the drummer in 2017, when they both joined New York guitarist Joel Harrison on a tour with his band Spirit House.

"We deeply connected right away: from the first notes in the sound check," says Denson. "It felt like kindred spirits, rhythmically; a whole other language was taking place behind the soloists, and it was totally enthralling." They kept in touch. Denson, searching for another opportunity to collaborate with Blade, thought of Pilon as an ideal third partner-"He's a virtuoso player but very sensitive and very musical, the same words I would use to describe Brian," he says-and extended an invitation to both.

Between Two Worlds is a collection of all original material, with Denson and Pilon each contributing half the compositions.

Denson's own projects are not the only items on Ridgeway Records' release schedule. The bassist's label will be issuing a handful of other recordings this year. Among these is the debut recording by multi-instrumentalist Dillon Vado (who plays the drums on Jeff Denson Live), which will be released in the summer, and the third album by the expansive electro-acoustic ensemble Negative Press Project co-led by bassist Andrew Lion and pianist/keyboardist Ruthie Dineen, with other projects to follow.

In addition, Denson maintains an ever-rigorous performing schedule, often with some 60 to 70 concerts per year.  Among the highlights are upcoming performances with his own bands including the Jeff Denson Live quartet and the San Francisco String Trio (with guitarist Mimi Fox and violinist Mads Tolling) whose tribute to the Beatles' Sgt. Pepper's Lonely Hearts Club Band, the 2017 album May I Introduce to You, earned critical praise. Denson will also pay tribute to Bill Evans' landmark album Sunday at the Village Vanguard with pianist Joe Gilman at SFJAZZ; he's also got gigs as part of New York trombonist John Fedchock's quartet; another quartet with pianist Susan Muscarella and vocalist Kenny Washington; with a trio led by pianist Edward Simon; as well as the Anton Schwartz Quartet.

Denson's work as an educator at the California Jazz Conservatory will also expand in the fall 2019 semester when he officially becomes Dean of Instruction. But that role won't sideline his commitment to teaching and community outreach.  He'll still teach students at CJC and will be part of a number of summer educational initiatives including a week-long Jazz Piano Intensive headed by Susan Muscarella, a two-day Vibraphone and Bass Boot Camp, co-led by Denson and Philadelphia-based vibraphonist Tony Miceli, and a Guitar-Intensive Workshop headed by Mimi Fox, as well as serving on the faculty of the Golden Gate Bass Camp.

It's all part of Denson's quest to push his creative ability to its limits. "I've got so many ideas I want to try, and I don't want to put myself in any kind of box," he says. "Everything I do has a thread that runs through it-and that thread is me. It's who I am."

Born December 20, 1976 in Arlington, Virginia, Jeff Denson grew up in the Washington, DC area. He began playing alto saxophone in the third grade, switching in high school to bass and vocals. He studied at Virginia Commonwealth University and Northern Virginia Community College, all the while freelancing heavily on the DC jazz scene, before transferring to Boston's prestigious Berklee College of Music to complete his degree. At Berklee, Denson co-founded the trio Minsarah, touring and recording with the band for fifteen years and becoming the accompanist for the legendary saxophonist Lee Konitz for over twelve years. In the meantime, Denson completed a master's degree at Florida State University and a DMA at the University of California at San Diego, and recorded his first solo project in 2012's Secret World. Denson moved to the San Francisco Bay Area in 2011 to become a professor at the California Jazz Conservatory. Since then, he has become a major player on the international scene and earned wide critical acclaim for his musicianship. DownBeat Magazine has cited Denson's "considerable gifts as an improviser, interpreter and sonic trailblazer..." earning him a spot on the DownBeat International Critics Poll.  Germany's Jazz Podium Magazine noted that "Denson is breaking new groundŠ(he is) one of the leading bassists of contemporary jazz." Denson has released twelve albums as a leader or co-leader and performs in some 60 concerts annually.  He also spearheads Ridgeway Arts, a nonprofit designed to enhance and fortify the Bay Area scene with educational initiatives, concert presentations and recordings released on Denson's Ridgeway Records label.