Making a statement: trumpeter Rob Zinn is “All In” 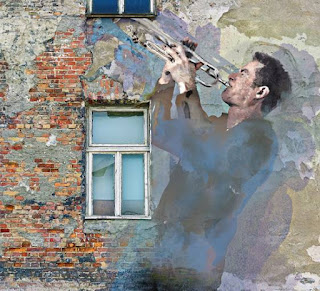 Committed to continue the momentum created by last year’s “Walk The Walk” album in pursuit of his goal of becoming a contemporary jazz headliner, trumpeter Rob Zinn will drop a new single, “All In,” that goes for playlist adds on June 17. The track that bridges the gap leading to his third studio album is produced by two-time Grammy winner Paul Brown.

Zinn wrote “All In” with Brown and Lew Laing Jr., who crafted the rhythmic urban groove and smooth harmonies that illumine the big city backdrop for the hornman’s cool jazz declarations. Tapping into his diversity as a musician and composer, to Zinn, the cut that sounds like a nocturnal drive on the coast on a summer eve makes a statement - professionally and personally.
“I am 100% committed, ‘all in’ this journey of becoming an international trumpet player and composer and will remove any obstacle standing in the way of achieving my goals. The song also speaks to the relationship that I am in, in that I am ‘all in’ with her as my love, soulmate and life partner. Sharing this journey with her is a beautiful thing. ‘All In’ is a statement, if you will, about the commitments that I’ve made to my music, my artistry and my relationship - not necessarily in that order,” said Zinn, who plays Tin Pan in Richmond, Virginia this Saturday (June 8) with saxophonist Tony Exum Jr.
“Walk The Walk” showcases Zinn’s versatility, incorporating funk, Latin, R&B, rock, pop and urban jazz. With Brown in the producer’s chair and on guitar, the set features trumpet and sax collaborations between Zinn with Andrew Neu and Michael Paulo. Singles issued from the collection garnered global airplay and earned most added status on the Billboard chart. The record built on Zinn’s 2016 solo debut, “Yesterday Again.”
Born in Maryland and raised in nearby Delaware, Zinn has played trumpet and flugelhorn in a wide array of settings - from swing and jazz big band to blues, dance and tribute bands. A top-drawer sideman, Zinn has performed with a luminous list of soul-jazz hitmakers, including Brown, Rick Braun, Richard Elliot, Adam Hawley, Jazmin Ghent, Nick Colionne, Eric Marienthal, Kim Waters, Brian Bromberg, Jackiem Joyner, Marion Meadows, Chieli Minucci and Ragan Whiteside. Fronting his own band, Zinn opened for Grammy winners Norman Brown and Jeff Lorber Fusion as well as Pieces of a Dream. This year, Zinn performed at several prominent jazz festivals such as Berks Jazz Festival, Mallorca Jazz Festival and Sandy Shore’s Jazz Weekender. Zinn also played 2019 gigs in popular jazz clubs such as Philadelphia’s South paired with Neu and Spaghettini near Los Angeles where he accompanied Brown.
While work has only just begun on his next album, Zinn is eager to share “All In,” which reveals growth and maturity.

“My latest single embraces a fresh, groove centric, new type of song from me. Everything comes from my heart. Most of my song titles have deep meaning to me and are personal reflections about my life.  Naming a song is important. It has to mean something. I am ‘All In’ my musical journey and my commitment to my love.”