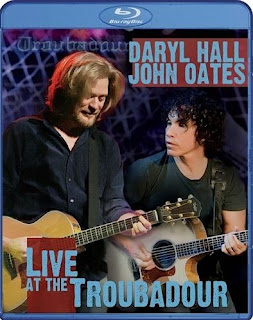 Last May, Daryl Hall and John Oates took the stage at the legendary Troubadour for the first time since playing their earliest Los Angeles shows there 35 years before. The best performances from this much anticipated two-night concert, which included hits such as "Maneater," "Private Eyes," "Rich Girl," "Sara Smile" and "Kiss On My List," will be made available in three formats - DVD, Blu-Ray, and a 1-DVD/2-CD combo, via Shout! Factory on November 25. Beyond the classic hits, the sold-out shows featured rarely performed fan favorites and deep album cuts, as well as Daryl Hall solo material, with the duo backed by a band comprised of longtime member T-Bone Wolk on guitar and voccls, Mike Braun on drums, Charles DeChant on sax, keys and vocals, Eliot Lewis on keys and vocals, Zev Katz on bass, and Everett Bradley on percussion and vocals.

The concerts were filmed by Blaze TV with 10 remote-controlled HD cameras, allowing the viewer to experience the performance as if they were inside the crowded LA club. Although an abridged version of the show will be broadcast on VH1's Rave HD channel in late 2008, the Live At The Troubadour DVD will be the only way to catch performances of all of the songs, as well as exclusive new interviews with Hall and Oates.

Hall and Oates have recently been receiving recognition from younger artists including KT Tunstall, Gym Class Heroes and Finger Eleven, all of whom have appeared on Daryl's media and fan-praised web show, http://www.livefromdarylshouse.com/ the captivating series that has been receiving kudos from Rolling Stone, Spin, Daily Variety and the influential Lefsetz Letter.

Daryl also wrote the H&O single "Everytime You Go Away," which singer Paul Young scored a number-one hit with a cover of the song in 1985. That same year, Daryl and John, participated in the historic "We Are the World" session as well as closing the Live Aid show in Philadelphia. By 1987, the R.I.A.A. recognized Daryl Hall and John Oates as the NUMBER-ONE SELLING DUO
in music history, a record they still hold today.

On May 20, 2008, the duo was honored with the Icon Award during BMI's 56th annual Pop Awards. The award has previously gone to the Bee Gees, Crosby, Stills & Nash, Paul Simon, Brian Wilson, Willie Nelson, James Brown, Ray Davies, Carlos Santana and Dolly Parton.
Posted by Jazz Chill at 8:00 AM