LOVE TRAIN: THE SOUND OF PHILADELPHIA 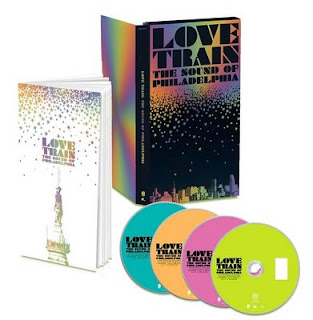 In 1971, Kenny Gamble and Leon Huff's Philadelphia International Records (PIR) began its odyssey to become "the second-largest African-American owned enterprise, second only to Motown," in the 1970s, according to Los Angeles Times writer Lynell George's opening liner notes essay. The evolution of the City of Brotherly Love from a decaying urban landscape into a modern mecca of soul music recording, production, songwriting and artist development, is explored in full panoramic depth on LOVE TRAIN: THE SOUND OF PHILADELPHIA. This deluxe 4-CD boxed set will be available at all physical and digital retail outlets starting October 21st through PIR/Legacy, a division of SONY BMG MUSIC ENTERTAINMENT.
LOVE TRAIN includes 71 tracks, an appropriate homage to PIR, which was launched by Gamble & Huff in 1971. Some 48 tracks represent the scope of PIR during its hitmaking prime, from the familiar sounds of the O'Jays, the only act to be found on all four discs ("Back Stabbers," "Love Train," "Time To Get Down," "Put Your Hands Together," "For The Love Of Money," "Give The People What They Want," "Let Me Make Love To You," "I Love Music," "Livin' For The Weekend," "Use Ta Be My Girl") to less frequently anthologized PIR artists including the Ebonys, Johnny Williams, the Futures, Bunny Sigler, People's Choice, Dee Dee Sharp, Jean Carn, the Jones Girls, and Leon Huff himself ("I Ain't Jivin', I'm Jammin'").In between is an indispensable collection of multiple tracks Â– hit singles, B-sides, album cuts Â– by PIR's flagship artists between 1971 and 1983: The Intruders, Harold Melvin & The Blue Notes, Billy Paul, MFSB, The Three Degrees, Lou Rawls, the Jacksons, Teddy Pendergrass, McFadden & Whitehead, and Patti LaBelle, the artists who shaped the PIR dynasty and sent its commercial success into the stratosphere.
Fully one-third of the tracks on LOVE TRAIN are non-PIR recordings, broadening the scope magnanimously. The Delfonics, Jerry Butler, Dusty Springfield, Wilson Pickett, Joe Simon, the Stylistics, the Spinners, William DeVaughn, Trammps, the Manhattans, and Deniece Williams all utilized the talents of Gamble & Huff and their associates. Starting with 1967's "Expressway (To Your Heart)" on the Crimson label, the Top 5 pop/R&B crossover classic by the all-white psychedelic rock band Soul Survivors (written, produced and arranged by Gamble & Huff), the chronological program proceeds with a repertoire that is truly unique amongst collections of this kind.The chronology is placed in the context of a three-and-a-half-decade timeline that opens the lavish full color booklet accompanying LOVE TRAIN.
In addition to the timeline and extensive, complete discographic annotations on every track, the 15,000-word booklet includes nine sections of historic essays, memoirs, recollections, and interview conversations by a host of luminaries. Along with Lynell George, whose primary four-part 2,000-word opening essay is entitled "You Can Still Stand Tall: The Sound Of Philadelphia," the other notable contributors include:
- British writer and lecturer Maurice Bottomley ("The Next Stop That We Make Will Be England");
- English and African American Studies professor Gerald Early of Washington UniversÂ¬ity in St. Louis ("Am I Black Enough For You?");
- veteran Philly session guitarist-producer Bobby Eli ("A Day In The Life");
- Russell Hall of Performing Songwriter magazine (who conducts a conversation with Gamble & Huff);
- New York area radio personality Felix Hernandez, host of "Rhythm Revue," who discovered his cousin was Sigma Sound Studios mastermind engineer Joe Tarsia ("Family Reunion"); and
- Political Science professor James Miller of the New School for Social Research, former music critic for Rolling Stone and Newsweek ("Love Is The Message");
- Leo Sacks, the Grammy-nominated producer who has supervised more than 200 historic album projects, conducts a conversation with Thom Bell;
- Grammy Award-winning veteran A&R man and former music journalist Joe McEwen's essay is entitled "Conquer The World," named for the recent PIR rarities anthology he co-produced with Sacks.
Posted by Jazz Chill at 3:45 PM