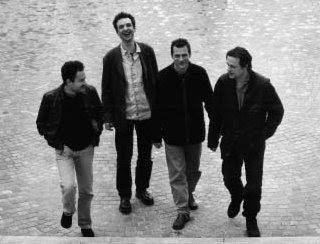 Moutin Reunion Quartet features twins, Louis and Francois, with Rick Margitza on saxophone and Pierre de Bathmann on piano. The quartet started 2007 as they toured the US in January, continued with a European tour in February; while recording its fourth album "Sharp Turn". In April, the quartet was in residence for a week at the Opera National de Lyon and for three days at the Ballard Jazz Festival in Seattle, WA. They toured the USA in June through September, also appearing in several festivals in France and in Turkey. After the release of "Sharp Turns" early November, the band has been on the road again for a 15 date tour, starting in France mid November and then going to the USA from east cost to west coast, ending at Jazz Alley in Seattle mid December. The conclusion of the year was an appearance at l 'Olympia in Paris for the annual show of the Parisian major jazz radio TSF. Early 2008 brought the highly energetic critically acclaimed group to the states, with appearances in Ann Arbor and Detroit, Michigan; Syracuse, New York; Chicago, and a tour de force performance at their South Bend debut at Trio's, adding another great review to their collection book.