D'ANGELO - I FOUND MY SMILE AGAIN 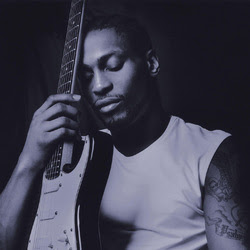 R&B-soul singer-songwriter D'Angelo has returned with his new single "I Found My Smile Again (Radio Edit)", which is slated for a September 30th release date exclusively through iTunes. The track is a true representation of D'Angelo's soul fusion, as the song is sprinkled with hints of hip hop, funk and jazz and layered with some of the most charismatic R&B vocal styling.

D'Angelo was one of the founding fathers of R&B soul movement of the mid- to late '90s, which took classic R&B fused it with new age hip-hop soul. D'Angelo's debut album, "Brown Sugar" earned him significant critical acclaim from the likes of Rolling Stone Magazine who proclaimed, "D'Angelo keeps moving forward even when he's looking in the rearview mirror. Like his fellow retrolutionaries Me'Shell NdegéOcello, Joi, Omar and Dionne Farris, he's shattering the conventional definition of black music." The album's double platinum success triggered extensive touring and soundtrack recordings for films like Space Jam, Get On The Bus, Down In The Delta, and Scream 2; and a duet with Erykah Badu for the "Marvin Is 60: A Tribute Album".

The singer-songwriter's follow-up, "Voodoo", debuted at number one on the Billboard Top 200, despite a five-year wait in between and positioned him firmly a the top of the R&B heap. Produced and written by D'Angelo and recorded live with no overdubs, "Voodoo" featured high profile collaborations with Raphael Saadiq, Lauryn Hill, Q-Tip, Method Man and Redman. The album took D'Angelo's career to new heights and earned the singer songwriter his first of two Grammy Awards for Best R&B Album, and D'Angelo also won the Grammy for Best Male R&B Vocal Performance for "Untitled (How Does It Feel)."

D'Angelo is currently putting the finishing touches on the next chapter in his book of musical fusion with his third solo offering, which is slated for release in early 2009 through the RCA Music Group and J Records.

For more information click tot Myspace.com/dangelo.
Posted by Jazz Chill at 8:00 AM