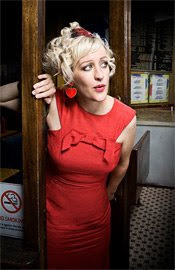 Six Degrees Records has announced the signing of British soul singer Alice Russell for North and South America, whose sophomore studio album, Pot Of Gold, will be released digitally on Nov. 4th and on CD Jan. 6th. Alice Russell has gained an enviable reputation as one of the UK's hottest singers, having recorded with the likes of Massive Attack and The Quantic Soul Orchestra, performed with the The Roots and supported Femi Kuti, De La Soul and appeared on the bill with Amy Winehouse in Cannes 2007. Alice's recent collaboration with Ninja Tune's Mr. Scruff on 'Music Takes Me Up' is a standout track from his new album Ninja Tuna and was released to rave reviews. As for her own material, she's been distilling her sound, laying live strings, horns and piano to compliment very intimate and uplifting shift in her style for her new album, Pot Of Gold. So make sure you don't miss a chance to sneak a first peek of the new Alice Russell material during her U.S. tour dates this November - her nine date tour hits major markets including Chicago, San Francisco, Los Angeles, and New York.