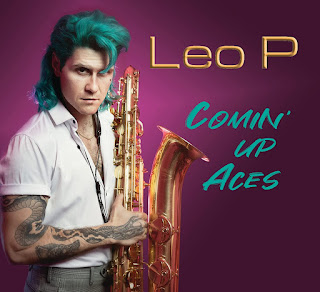 Imagine the scene: A full orchestra graces the stage on the elegant set of the prestigious classically-oriented BBC Proms. The orchestra’s drummer hits a dance beat and out strides a pink-haired baritone sax player honking in rhythm, executing James-Brown style wiggles as he plays, dancing, gesturing, mugging. The orchestra conductor and audience are at first startled, then amazed and finally delighted as Leo P tears the house down, interpolating a hot version of the Charles Mingus classic “Moanin’” along the way. Flash back to the year before. The Dixie Chicks and Beyoncé are backed by the house band performing their version of Beyoncé’s “Daddy Lessons,” when out steps a platinum-blond baritone sax player, wiggling and honking toward Beyoncé who wiggles her hips back in return. Who was that masked man and where did he come from? Only a couple years before you would have found him in the New York City subways backed by a drummer or sometimes a couple horn players, gob-smacking and delighting the most jaded New Yorkers with his manic dancing and playing. YouTube videos of these performances garnered tens of millions of views. It’s a reminder that quality music can be joyous fun, an unfiltered, unmannered outpouring of human spirit. The magic of Leo P did not go unnoticed by the gaming world either. In fact, Leo successfully sued Epic Games for its unauthorized use of Leo’s likeness and signature dance moves in the Fortnite “Phone It In” emote. Leo P, whose Too Many Zooz band has been touring the world, now steps forward with his debut solo album Comin’ Up Aces, due out November 4, 2022 on Shanachie Entertainment. Comin’ Up Aces presents Leo P as an artist who takes the baritone saxophone where no baritone sax player has gone before on a set of rich jazz-funk that aims to make jazz danceable again.

The high-energy dancing, theatrics and sound effects of a Leo P performance are irresistible but none of that can be delivered on a studio recording; the music itself must carry the day. On Leo P’s debut solo recording on Shanachie, the aptly titled “Coming Up Aces,” the music—a joyous amalgam of funk and jazz—does exactly that. “Don't let his over-the-top performances fool you,” says Shanachie’s VP of A & R Danny Weiss. “Leo P plays with the depth and passion of the jazz greats. Oh, and he's also revolutionized the baritone sax!”

Comin’ Up Aces is a compelling showcase for Leo P’s exceptional blowing as well as a fulfillment of his goal to deliver high-quality musicianship in an earthy, accessible package that is very different from his work with his band Too Many Zooz. “Too Many Zooz is very aggressive and high energy,” Leo notes.” As I got older I wanted to play a little more melodically and build my solos more deliberately and not play everything I know in a solo but take my time and be more emotional. For this album I wanted a few different types of grooves: funky, bluesy, salsa…different feels.”

We did "Goodbye Pork Pie Hat” because Mingus is definitely someone I love, his compositions and the freeness of his bands," Leo relates. “I had done “Moanin’” by him at the BBC Proms where people got to know me more as a player. So I wanted to do something by Mingus in my own style but something other than “Moanin’. I did “Cold Duck Time" because I love Eddie Harris; he’s one of my favorites. There are many great players who influenced me and Edie Harris is one of those people. He showed me that there doesn’t need to be many changes; I love to groove! I’m glad I studied bebop and harmony because it is a great foundation but it’s okay to play over two chords.”

“Issa Blues” reflects Leo’s love of New Orleans music. “The first time I went to New Orleans it was my 21st birthday," Leo says. “You can imagine how that worked out! It was the first time I was introduced to brass bands, like Rebirth Brass Band and TCB Brass Band. I saw a bunch of people playing in the street and thought ‘wow, it’s amazing’ because there were no guitars or keyboards or singing but everybody was partying and dancing, as opposed to New York where people would say 'ssshhh…listen to the solo.' We went on tour with Galactic; Stanton Moore is incredible so we got him on the record." Throughout the new album, Leo’s playing on baritone saxophone is a revelation and not simply because it is rare to hear so much soloing on the instrument. He plays notes that are not normally a part of the instrument’s range and with a fluidity and dexterity that is stunning. All in all, Comin’ Up Aces is a great marriage of chops, feeling and groove.

Leo P was born Leo Pellegrino in Pittsburgh, PA. He initially started playing clarinet at a young age, performing polkas with his father, an accordion player. Hearing the music of John Coltrane sparked an interest in saxophone, which he began playing in high school ensembles, though he still played clarinet and took classical lessons. When the baritone saxophone player became unavailable in the school ensemble, Leo took up the instrument and found that it had a unique appeal. He moved to New York in 2010 to attend the Manhattan School of Music on scholarship. At times he found the formalism of the school confining and some professors did not appreciate his unconventional way of playing and performing, not to mention his edgy fashion sense. Playing in the city’s jazz clubs seemed limiting also—especially for very little money. He figured he could do better money-wise playing in the subways with the added bonus that his audience was literally people from all walks of life. Playing sometimes solo and other times backed by a drummer or a couple horn players, Leo’s manic energy and spectacular dancing while blowing continuous rhythmic charged riffing captivated people. He presented as an alternative rock musician but he was playing instrumental, jazz-rooted music. Videos of his subway performances hit YouTube, went viral and soon he had millions of viewers worldwide. Those videos led directly to him being invited to perform at both the BBC Proms and the CMA awards show. Meanwhile, he formed two bands, Too Many Zoos, self-described as a “Brass House” band mixing jazz, Afro-Cuban rhythms, funk EDM and house music. and Lucky Chops. Too Many Zoos began touring widely in America and Europe and had their song “Warriors” featured in an international commercial for the Google Pixel 2; they also scored a Song of the Week on the BBC taken from their several EP and album releases.

Leo’s interest in edgy fashion is obvious and it is likewise unsurprising that his high energy performing style has evolved into a serious work-out regimen. He even posted a couple of workout videos on the Too Many Zoos channel. “Often musicians don’t care how they look,” Leo says. “But I think the visual is just as important in a performance as the music because when you go to a show you don’t say you go to hear a show you say you’re going to SEE a show. There are bands I don’t necessarily like who I love the way they look. Even Kiss for instance; they had a fantastic look that you remember. I always wanted attention. I used to be skinny but now I want more defined muscles now that I’m in my early 30’s. When I was playing in the subway I wasn’t working out because I was playing and dancing for hours. Now I’m touring so I work out every day. I like the natural high and the energy.”

It’s no surprise then that Leo wants his music to reach the widest possible audience, something many jazz musicians don’t aspire to. “I want to bring the party back to jazz. I want to make people dance. I want to wear badass suits and look cool as hell and present something special to people that they will always remember!”