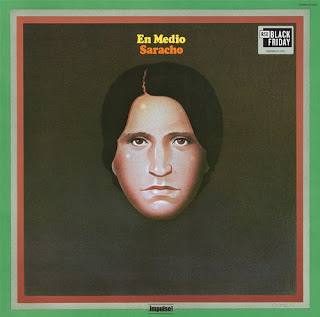 In 1973, Garrett Saracho was a promising, up-and-coming Chicano jazz musician from Los Angeles having just released his hotly-tipped debut album, En Medio (as Gary Saracho) on Impulse! Records, representing what the New York Times called the label's "West Coast contingent." Despite receiving a five-star review from DownBeat magazine, the authority on all things jazz, which led to friend Herbie Hancock calling and congratulating him on the perfect review, praise from Wayne Shorter, and interest from radio stations, a cosmic confluence of unfortunate events – an oil embargo in the Middle East, changing label leadership, slashed budgets – led to the record not receiving the promotion and ultimately not gaining the traction it so deserved at the time.

For the first time since its original 1973 release, Garrett Saracho’s lost-to-time and underappreciated classic, "En Medio," a heady fusion of spiritual jazz, funk and Latin rock, will be released on vinyl via Impulse!/UMe ahead of its 50th anniversary next year, exclusively for Record Store Day Black Friday.

Disappointed and disillusioned, the composer and keyboardist, one of the most exciting young musicians in L.A.'s fertile jazz underground, stepped away from music and left his Fender Rhodes behind to return to school. He would go on to have a successful and rewarding career in the film industry, first as a carpenter, later as an editor for several blockbuster films, more recently as a screenwriter and filmmaker. He'd eventually return to music years later, touring with the legendary Native American rock band Redbone, fronted by his cousins Pat and Lolly Vegas, and continue to quietly make music in his studio. In recent years, Saracho's work has found renewed interest from a new generation of fans, with the long out-of-print and unavailable on streaming platforms En Medio being rediscovered by those in the know and the crate digger community.

Now for the first time since its original 1973 release, Saracho's lost-to-time and underappreciated classic, En Medio, a heady fusion of spiritual jazz, funk and Latin rock, will be released on vinyl via Impulse!/UMe ahead of its 50th anniversary next year, exclusively for Record Store Day Black Friday Limited to 3500 copies worldwide, the LP, which has been mastered from the original tapes, will be available to purchase on Friday, November 25th at participating indie record stores as an "RSD First" release. Visit RecordStoreDay.com for more information.

As far as debut records go, En Medio is lightning in a bottle. A singular statement recorded in one weekend in May 1973 at The Village Recorder in West L.A., with a host of musicians with varying levels of association to the Union of God's Musicians and Artist Ascension (UGMAA), a network of largely African American jazz musicians organized by Horace Tapscott that acted as a community resource, linking musicians together and helping them find work. This included Roberto Miranda, bassist in the Herbie Baker Quintet and longtime mainstay in Tapscott's Pan Afrikan Peoples Arkestra (PAPA), and Owen Marshall, a Compton-based arranger and multi-instrumentalist who had previously worked for Lee Morgan.

After spending nearly fifty years away from the music industry, Saracho's musical journey has gained a second wind and in addition to the long overdue reissue of En Medio he was recently recruited by the influential jazz collective Jazz Is Dead to make his return to jazz on their latest exciting collaboration. Available now, Garrett Saracho JID015 sees Ali Shaheed Muhammad and Adrian Younge performing a collection of shapeshifting tunes with Saracho that hop from one style or tempo to another with shocking ease. Blending together Latin soul and psychedelic rock influences alongside his enduring love for jazz, the album is a tribute to the enduring ties and cultural dialogues between genres, and to the perseverance of a musician who once stood on the precipice of stardom, now receiving his long overdue acclaim. Early reviews for the record have critics raving, with Mojo awarding the album four stars and declaring it "arguably Jazz Is Dead's best LP yet," and hailing the music as "sounding like a David Axelrod-meets-Gil Evans mash-up as imagined by Cal Tjader, the LP consists of eight ensemble pieces, ranging from edgy soundscapes (Altitude) and filmic tone poems (The Gardens) to percolating Chicano grooves (El Cambio Es Necesario)."

With an incredible new album and a long-lost gem returning, Garrett Saracho is finally getting his due, five decades later.