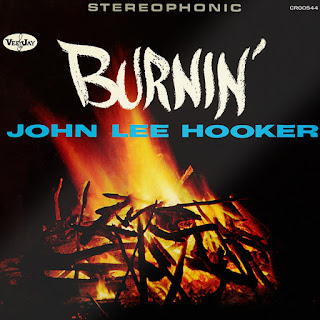 Craft Recordings celebrates the 60th anniversary of John Lee Hooker’s electrifying blues album, Burnin’, with several special reissues. Set for release on February 24, 2023,the album includes the original recording of Hooker’s highly-influential signature hit, “Boom Boom,” and features members of the legendary Funk Brothers (Motown Records’ celebrated house band).  Newly remastered from the original analog tapes by Kevin Gray at Cohearent Audio, Burnin’ will be available in several formats. A 180-gram vinyl LP features a stereo mix of the album, as it was first released in 1962, while a tip-on jacket, which replicates Vee-Jay Records’ original designs, rounds out the package. In addition to a wide release on classic black vinyl, fans can also find the album in a variety of limited edition color pressings, including Flame Orange vinyl (via Barnes and Noble), Translucent Red vinyl (via Independent Record Stores), and Fuego Blend vinyl (available exclusively via JohnLeeHooker.com, along with a brand new official T-shirt featuring the iconic album artwork).

Expanded CD and digital editions offer both mono and stereo mixes of the album, plus a previously-unreleased alternate take of the song “Thelma,” captured during Hooker’s November 1961 session. The CD also includes new liner notes by the GRAMMY®-nominated journalist and music historian, Bill Dahl. Digital configurations include standard and hi-res, 192/24 and 96/24. Fans can preview the new Mono mixes with the advance two-track single “Boom Boom (Mono and Stereo)” which is available to stream or download today.

Known fondly as “King of the Boogie,” John Lee Hooker (1917-2001) was one of the most important blues artists of all time, whose work had a significant impact on modern music. Born in Mississippi to a family of sharecroppers, Hooker learned how to play the guitar at a young age, picking up his distinctive technique from his stepfather. In his 20s, he relocated to Detroit, where he spent his days as a janitor in an auto factory and his nights pursuing a career as a musician. He scored his first No.1 R&B hit with one of his earliest recordings, 1948’s “Boogie Chillen,” followed by singles like “Hobo Blues,” “Crawlin’ King Snake,” and “I’m in the Mood,” all of which landed in the R&B Top Ten. But these recordings typically featured a simple set-up: just Hooker alone in the studio, accompanying himself on guitar and keeping the beat with his foot. By the turn of the ‘60s, when Hooker signed to Chicago’s Vee-Jay Records, his sessions began to expand—initially with a second guitarist or a harmonica player (as heard in albums like Travelin’ and The Folklore of John Lee Hooker). Burnin’, however, was a stylistic departure that would not only bring the bluesman a new generation of fans, but would also change the course of his career.

Recorded in just one day in November 1961, Burnin’ paired Hooker with a full, electric band for the first time on record, with six of the most talented musicians of the era—all of whom served as members of Motown Records’ house players. Joining Hooker was keyboardist Joe Hunter, bassist James Jamerson, guitarist Larry Veeder, and drummer Benny Benjamin. A horn section, featuring saxophonist Hank Crosby and baritone saxophonist Andrew “Mike” Terry, added additional textures to the songs. These men, who soon came to be known as the Funk Brothers, would appear on the biggest hits of the decade, backing sessions by the Supremes, Marvin Gaye and Tammi Terrell, the Temptations, and Stevie Wonder.

The material that the group covered that day—predominantly originals by Hooker—was also incredibly strong. Among them was “Boom Boom,” considered to be one of the most important songs in recorded music. With its catchy riffs, airtight rhythms, and utterly cool vocals, the song would become Hooker’s signature hit and an instant blues standard. But the recording was an outlier for the bluesman, as Bill Dahl explains in his liner notes. “Hooker had a rare gift for improvising songs in the studio, sometimes incorporating lyrics from other sources and seldom playing anything the same way from one take to the next. It was an impromptu mindset that often left his sidemen in the unenviable position of either sinking or swimming. But he happened to have a song in mind for this date.’” Dahl continues, “The tension between the stop-time vocal passages in ‘Boom Boom’ and the release whenever the band broke into a straight-ahead jumping rhythm was a fresh development in Hooker’s massive songbook. Arrangements this concisely conceived weren’t John Lee’s primary strength, but he was proving surprisingly open to updating his sound more than a decade into his recording career.”

Released as a single by Vee-Jay in the spring of  1962, “Boom Boom” became Hooker’s biggest hit in more than a decade, spending eight weeks on Billboard’s R&B chart and peaking at No.16 by the summer. It was also one of only two songs by the blues star to break the Billboard Hot 100, landing at No.60. 30 years later, in 1992, the timeless song entered the UK pop charts’ Top 20 (thanks to an appearance in a commercial for Lee Jeans). Music critic Charles Shaar Murray, meanwhile, proclaimed it to be “the greatest pop song [Hooker] ever wrote.”

While “Boom Boom,” which opens the record, was the only charting single off Burnin’, the album offers a trove of standout performances and stellar songwriting. Among the highlights is the swinging—and slightly foreboding—“Thelma,” in which Hooker assures his cheating lover that he forgives her. His increasingly frenzied vocals, however, tell another story. Equally charged is the spoken word “Drug Store Woman,” in which the artist tells his woman (in his signature drawl) to stay home, rather than buy beauty products and stockings at the store. The mournful “Blues Before Sunrise,” written by Leroy Carr, finds Hooker delivering a particularly stirring and emotional performance.

On the other end of the spectrum is “Let’s Make It,” a sprightly, passionate tune based on just one single chord. Hunter and Terry shine particularly brightly, as they drive the momentum of the seductive track. Additionally, Dahl calls attention to “Keep Your Hands To Yourself,” arguing that the song is “the most unusual item [on the album], which opens with the unmistakable riff from the Champs’ ‘58 rock and roll instrumental smash ‘Tequila.’ Unlikely though it seems, that repeating riff, seemingly detached from the blues milieu, made a perfect backdrop for Hooker to threaten any would-be suitors crazy enough to romance his lady.”

While Hooker maintained a prolific output during this period, it’s safe to say that Burnin’, released in March 1962, was a coveted record for countless aspiring rock musicians. Across the Atlantic, bands like the Rolling Stones and the Yardbirds borrowed heavily from Hooker’s sound, while The Animals scored a hit with their own rendition of “Boom Boom” in 1964. As the decade continued, Hooker’s star only grew. Embraced by the counterculture scene, Hooker regularly shared the stage with many of the biggest folk and rock acts of the day and performed at a number of major festivals. Decades later, “Boom Boom” would be inducted into the GRAMMY® Hall of Fame, the Blues Foundation’s Hall of Fame, and would rank on the Rock and Roll Hall of Fame’s “Songs That Shaped Rock and Roll” list.

Throughout the latter half of the century, Hooker maintained a steady pace of studio work, collaborations, and live shows. At 72, he released the biggest album of his career, The Healer, which earned him his first GRAMMY® Award, and sold more than a million copies. He found continued success with albums like Boom Boom and Chill Out in his final decade. Among his many honors, Hooker was inducted into the Blues Hall of Fame in 1980 and the Rock and Roll Hall of Fame in 1991. He received a star on the Hollywood Walk of Fame and was celebrated with a GRAMMY® Lifetime Achievement Award in 2000. Hooker was also a recipient of the highly prestigious National Heritage Fellowship from the National Endowment for the Arts—the highest honor that can be bestowed upon those in the folk and traditional arts by the US government. Today, Hooker’s legacy lives on through his extensive catalog of recordings, as well as through the many artists whose music he inspired. His work can be heard frequently in films and TV shows, while many of his songs have found a second life through sampling by hip-hop and electronic music’s biggest acts.