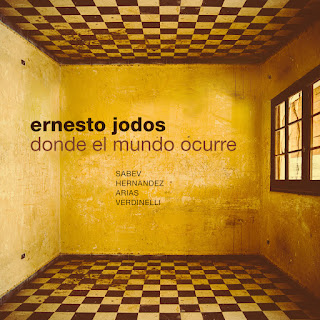 If you even follow ear s& eyes Records slightly or how the jazz scene in Buenos Aires has been explosive these past years, you would definitely know the name Ernesto Jodos. He's one of those cats who has been teaching all young lions since they were teens. He's been such an important influencer and has guided what Argentine jazz is today. Yes, he went to Berklee years ago, and yes, his most recent album, Confluence, features Mark Helias and Barry Altschul, but he's taken those influences back to Argentina and transformed his take on jazz music with his own unique voice and vision. This new album is a grand culmination of this; Donde el Mundo Ocurre! The rest of his group on this are a mix of those young lions as well as one of the most influential and important voices in not only jazz, but also rock, Latin Grammy Award winner &  drummer Sergio Verdinelli (another name that shows up quite a bit in the ears & eyes catalog including well-received No Me Digas Loco (as leader), and as sideman Rodrigo Dominguez' Borocotopo and Juan Bayon's Vidas Simples. Rounding it out is Inti Sabev (clarinets), Juan Pablo Hernández (guitar) & Diana Arias (contrabass). 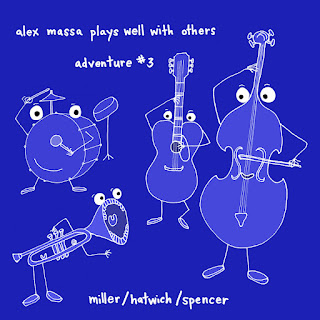 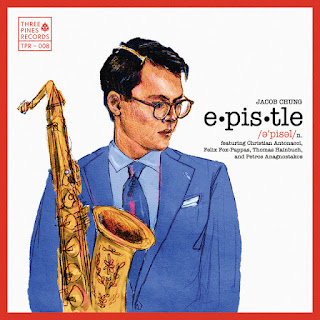 Toronto saxophonist/composer Jacob Chung’s (b. 2000) debut release Epistle is a swingin’ 45-min album of original music written for quintet. This release marks a new era for Canadian jazz, signifying the hope and promise of a new generation’s coming-of-age in a post-Covid world. The musicians on this record are a handful of the most exciting young Canadian talent. Pianist Felix Fox-Pappas, drummer Petros Anagnostakos, and bassist Thomas Hainbuch, who at 24 years of age is the band’s eldest member, comprise the rhythm section while trumpet player Christian Antonacci joins Chung on the frontline. The 6 track album features Chung’s Epistle Suite, which reflects the joy of the gospel message through a commitment to the spirit of swing. Rounding out the album are 3 hard-driving bop tunes, each a contrafact on a familiar form. Epistle is a proclamation. Over the duration of this album, Chung and his young, swingin’ band emphatically state, “we are right here, right now; we play hard and believe in swing; this is jazz in Canada.” 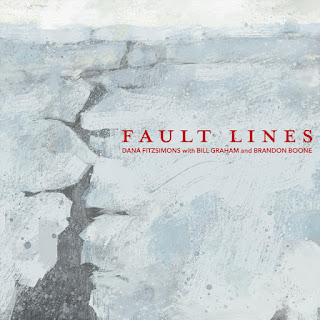 On Fault Lines, drummer Dana Fitzsimons collaborated with two other superb Atlanta-based musicians, pianist Bill Graham and bassist Brandon Boone, to create a program of rhythmic, free-style jazz improvisations. Although Fault Lines is a truly collaborative project, Fitzsimons is the group’s guiding light. He feels that music often reflects the psychological or emotional state of the musician at a particular point in time. This is the second album that he has spearheaded. His first recording, The Cheap Ensemble (2017), was inspired by a painting by Gerhard Richter and reflected the feelings of melancholy and nostalgia Fitzsimons was experiencing back then. With its ambient atmospherics, the music was intimate and soothing. Fault Lines, however, presents a more optimistic and energetic frame of mind. Fitzsimons has been an ardent fan of free-style jazz for many years. During the Covid-19 lockdown, he had extra time to re-think everything, including how he wanted to express himself musically. He started to hear his playing differently and changed his drum kit to facilitate his new vision. “When the band finally got together to play again, there was a lot of pent-up energy between us. We were all on the same page musically,” says Fitzsimons. “The music we wanted to make requires a lot of close listening and allowing the music to take you wherever it wants to go, untethered from strict ideas about time, form, and harmony. With all this freedom, it was important to me that the music still be rhythmic and lyrical so that the music invites the listener in, even for those who are not accustomed to free jazz.” The music on Fault Lines is adventurous, inventive, and lyrical. Although Fitzsimons is the group’s main timekeeper, Graham and Boone are also drummers, so it is not surprising that the music has a strong rhythmic center despite the players own personal, imagistic approach to time.