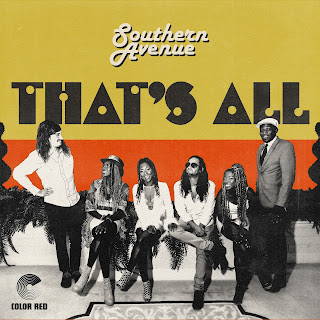 Memphis-based GRAMMY nominee Southern Avenue have released their rendition of the 1983 Genesis classic, “That’s All.” The now 6-piece blues-soul act lays out their funky, groovy imprint of the track that will be come out via Color Red, record label and music platform founded by Eddie Roberts of The New Mastersounds. The group will be celebrating the release with a performance at Salvage Station in Asheville, North Carolina on the day of its release on 11/11.

While on tour in the UK, Israeli-born guitarist, Ori Naftaly played his bandmates some of his favorite music from UK-based artists that he grew up on. He went deep playing the first three Genesis albums back-to-back and the band went further down the rabbit hole by watching a documentary on the group. Vocalist Tierinii Jackson had always been a fan of Phil Collins and when it came time for the band to vet songs to cover, Nalfaty suggested an 80s-era Genesis hit. Southern Avenue takes the already groovy pop-rock song and gives it a soulful spin with controlled command in the studio that translates into an electrifying banger at live shows driven by luscious vocal harmonies and vintage organ and guitar tones.

Honoring the southern soul legacy with a 21st-century sensibility, the band shows no signs of slowing down after their 2020 GRAMMY nomination for Best Contemporary Blues Album. The group maintains an active tour schedule around the globe, earning slots at coveted festivals including Bonaroo and Austin City Limits, and supporting prominent acts such as Sheryl Crow, Tedeschi Trucks Band, Jason Mraz, Los Lobos, JJ Grey & Mofro, and more.

The band will close out 2022 with a four-show run in The Netherlands in early December which culminates with a headlining performance at the Basel Blues Festival in Switzerland on December 20th. Southern Avenue will return to the US with a pair of New Years weekend shows in Colorado at Schmiggity’s (Steamboat Springs) on December 29th and Center for the Arts Crested Butte on December 31st (a themed event, dubbed “A Funkified Formal Affair”). Southern Avenue has already announced several major international events in 2023 including the Legendary Rhythm & Blues Cruise and the Bluesfest Byron Bay (Australia).

Memphis-based, GRAMMY®-nominated Southern Avenue inked their first record deal with legendary Stax Records in 2016. The first Memphis band signed to Stax in over 40 years, their self-titled debut was an immediate phenomenon, reaching #1 on iTunes’ “Top Blues Albums” chart before being honored with the 2018 Blues Music Award for “Best Emerging Artist Album.” 2019’s KEEP ON proved an even greater success, debuting among the top 5 on Billboard’s “Top Blues Albums” chart amidst worldwide critical acclaim, ultimately earning Southern Avenue their first GRAMMY® Award nomination, for “Best Contemporary Blues Album”.  Southern Avenue’s 2021 full-length LP, Be The Love You Want, was released on Renew Records/BMG. Produced by Multi-GRAMMY® winner Steve Berlin (Los Lobos, Susan Tedeschi, Deer Tick), American Songwriter called it “A potent soul force!” and No Depression proclaimed it’s “one of the most listenable, and danceable, records of the year.”

In addition to the early success that the band has had with their recordings, they have also found a home on the road. The band has performed in 15 countries on three continents and averages over 150 shows in a typical year, making the group one of the most sought-after live performance experiences.  Their high-energy shows have captivated audiences around the globe, making this eclectic group a must-see at venues and festivals alike.