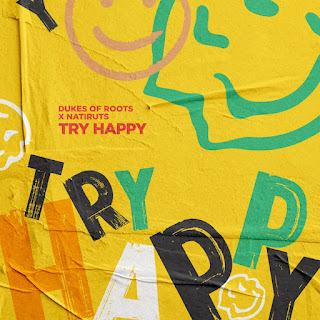 Dukes Of Roots is proud to announce the newest single "Try Happy" with Natiruts. The new song, produced by Sean “YoungPow” Diedrick and executive produced by Rod Walkey, was the first written and recorded for the upcoming Dukes Of Roots project. It was later revisited by LionChld to include the Brazilian reggae roots band and Latin GRAMMY nominated, Natiruts. “Try Happy” is an uplifting tune about getting happy! It is the type of song that can lift low spirits, encouraging one to look on the bright side and lean into the happiness and blessings around you. The single is due out December 2 on all streaming platforms via Migration Records x YoungPow Productions.

Dukes Of Roots spent some time in Brazil working with Natiruts on “Try Happy.” Reflecting back, they comment, "Alexandre has been so much fun to work with. He is an incredible talent and such a kind person. We had many laughs on the beach days in Brazil leading up to the recording session. The Natiruts studio and engineers made the recording session easy and professional. We hope to be back again someday soon to do more work together."

A music video for the single, directed by Kieran Khan, and filmed in Jamaica and Brazil, will be dropped soon as well.

This is the second single release from the Dukes Of Roots’ forthcoming album due out next year. “Try Happy” follows their cover of the acclaimed song “Pressure Drop.” “Pressure Drop” is a tribute to friendship, roots music and Toots Hibbert, featuring the legendary Tarrus Riley. The live performance video recently premiered with Reggaeville, watch here: https://youtu.be/57nJx3Jco54.

Although Dukes Of Roots is a new movement, it’s comprised of well-known musicians and artists who’ve come together to celebrate roots reggae music! With Mermans Mosengo on vocals, the Congolese singer has performed all over the world with the arts organization Playing For Change and a variety of other bands. Joined with George “Fully” Fullwood on bass, the Jamaican musician is regarded as one of the most prolific bass players in the scene having worked with greats like Toots Hibbert, Bob Marley, and Peter Tosh - to name a few. Courtney Diedrick on drums is also from Jamaica, and is a Grammy-award winning musician whose credits, like his bandmates, are prolific and include Damian and Stephen Marley, Mick Jagger, Dave Stewart – to name a few. Sean Diedrick on production and keys, is a Grammy-award winning producer from Jamaica who has been producing for legendary artists like Damian Marley, Stephen Marley, Sean Paul, Shaggy and Popcaan for years. And T Rod on guitar also composes and writes lyrics for the band – together they are: Dukes of Roots!