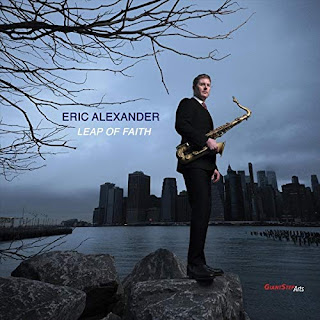 "[Eric Alexander] is invariably eloquent and persuasive, reinforcing his stature as one of the jazz world's most astute and accomplished tenor saxophonists." - Jack Bowers, All About Jazz

"A lot of magic and beauty can come out of the freedom to explore that Jimmy [Katz and Giant Step Arts] granted us. I think the reason the music sounds the way that it does is because there was so much trust and freedom." - Johnathan Blake, drummer and Giant Step Arts recording artist

A modern-day master of the tenor saxophone, Eric Alexander is revered in hard bop and post-bop circles for his muscular tone, sophisticated expression, and exhilarating melodic invention. On his latest album, Leap of Faith, Alexander takes an unexpected plunge into the unknown with a set of far-reaching excursions with a brilliant chordless trio featuring bassist Doug Weiss and drummer Johnathan Blake. Recorded live at New York City's Jazz Gallery, the stunning, surprising new album will be released May 17, 2019 thanks to the groundbreaking new non-profit Giant Step Arts, led by noted photographer and recording engineer Jimmy Katz.

It was at Katz's suggestion that Alexander decided to take this leap in the first place. The two men have known one another for more than 25 years, crossing paths shortly after the Illinois native arrived in New York City in the early 90s. Hearing the passion and imagination in Alexander's playing, Katz would often suggest that the saxophonist explore a more expansive setting than his usual bop métier afforded. Being an artist with a particular vision (and a dose of the accompanying stubbornness), Alexander's instinctual response was to reject any suggestion of where he should take his own music.

"I know what I feel and what I'm enthusiastic about as a musician, so I have a built-in knee-jerk reaction to people telling me I should do something different," Alexander explains. "You have to trust what you're doing, or it can be very hard to be genuine. Once the idea began to set in, though, I realized it could be really exciting and rewarding on many levels. I started trying to figure out what type of material would satisfy the mission of the project and also make me feel like I was being honest, and I came up with something that was a little more than slightly different from what I've done before."

Creating the environment to do just that - embark on daring new endeavors, freed from the usual demands of record label and sales chart expectations - is precisely why Katz founded the innovative Giant Step Arts. Katz launched the organization in January 2018 in order to provide some of the music's most innovative artists with the artistic and financial opportunity to create bold, adventurous new music free of commercial pressure.

"Giant Step Arts will not be selling any music," Katz says. "We have two goals: help the musicians and raise more money so we can help more musicians."

That model, Alexander says, is for him as radical a departure from the norm as the music on Leap of Faith. "It's diametrically opposite in every single sense of that term from everything else that I've done. It feels like a test for a very different model and I'm anxious to see what's going to happen. It's a leap of faith, appropriately enough."

While Leap of Faith falls squarely into a tradition of unbridled tenor exploration that dates back to some of Alexander's major heroes, notably Sonny Rollins and John Coltrane, it represents a first for Alexander in a few ways. He has rarely played in, and almost never recorded in, a chordless trio setting. It also marks the first time, in a discography that counts more than 40 releases, that Alexander has recorded an album consisting solely of his own original tunes.

Aside from Katz's persistent urging, Alexander was also inspired to undertake this bold new endeavor by a turbulent period in his life that included the death of his father, who is paid heartfelt tribute on the tender and searching ballad "Big Richard." That was the most potent of the several "mid-life bumps in the road" that Alexander found himself facing upon turning 50 in 2018. "That may have put me, emotionally and creatively speaking, in a bit more of a raw space," he concludes. "I thought I could use this project to vent, that maybe it would be cathartic to just let things fly."

Inaugurated by Alexander's roving melodic tendrils, the trio begins the album with a brief free investigation that snaps into the bristling, brawny "Luquitas," built upon and opened up from an earlier Alexander original dedicated his second-born son, "Little Lucas." The piece is an out-of-the-gate showcase for the trio's boundless energy, surging forward with unceasing momentum for more than eight minutes. It's followed by "Mars," which borrows the harmonic progression of a surprising source: the Bruno Mars megahit "Finesse."

"My kids liked it," Alexander explains. "If your kids actually want to share something with you, it's good to stop and listen for a second. I really liked it, then I took that ball and ran with it."

Meditative piano chords open "Corazon Perdido," which breaks the chordless pattern by having Alexander accompany himself for a few ruminative minutes. It's followed by some of the saxophonist's most electrifying blowing, on the swaggering "Hard Blues." Blake's powerful rumble provides the bed for the blistering, volatile "Frenzy," while Weiss' deep, moaning bowed bass becomes the undercurrent of "Magyar," based on a reduction of themes from Béla Bartók's "Music for Strings, Percussion and Celesta." Coltrane's influence rears its fiery head on the far-reaching finale, "Second Impression."

For those who've heard Alexander stretch out live, some of the more explosive playing on Leap of Faith may not be quite so shocking. Alexander says it's also not such a departure given his own wide-ranging tastes, which have not always emerged so strongly in his music. "Despite the fact that people believe that they have a pretty good idea of what my 'brand' is, I'm not really a bebop purist. I've always incorporated bits and pieces of what people might consider the avant-garde into what I do, so this was just a matter of letting that take over. That was really the giant step for me, and it felt at times like an out of body experience."

Boasting a warm, finely burnished tone and a robust melodic and harmonic imagination, tenor saxophonist Eric Alexander has been exploring new musical worlds from the outset. He started out on piano as a six-year-old, took up clarinet at nine, switched to alto sax when he was 12, and converted to tenor when jazz became his obsession during his one year at the University of Indiana, Bloomington. At William Paterson College in New Jersey he advanced his studies under the tutelage of Harold Mabern, Joe Lovano, Rufus Reid, and others. Eric has appeared in many capacities on record, including leader, sideman, and producer, as well as composing a number of the tunes he records. By now, Alexander has lost count of how many albums feature his playing; he guesses 80 or 90. While he has garnered critical acclaim from every corner, what has mattered most has been to establish his own voice within the illustrious bop-based jazz tradition.

Through his award-winning photography with wife Dena Katz, and his esteemed work as a recording engineer, Katz has spent nearly 30 years helping to shape the way that audiences see and hear jazz musicians. Katz has been hired to participate in over 540 recording projects, many historic, and has photographed nearly 200 magazine covers. Whether taken in the studio, in the clubs, on the streets or in the musicians' homes, his photographs offer intimate portraits of the artists at work and in repose and capture the collaborative and improvisatory process of jazz itself. Recipient of the Jazz Journalists Association award for jazz photography in both 2006 and 2011, Katz's work has been exhibited in Germany, Italy and Japan. Among the world-renowned artists he's photographed are Sonny Rollins, Keith Jarrett, Ornette Coleman, Freddie Hubbard, Roy Haynes, Cassandra Wilson, Ray Charles, Dave Brubeck, Quincy Jones, Herbie Hancock, Wynton Marsalis, John Zorn, Pat Metheny, and Dizzy Gillespie. In addition to his well-known visual art, Katz is an esteemed recording engineer who has worked with artists including David S. Ware, Joe Lovano, Harold Mabern, William Parker, Benny Golson, and Chris Potter, among others.