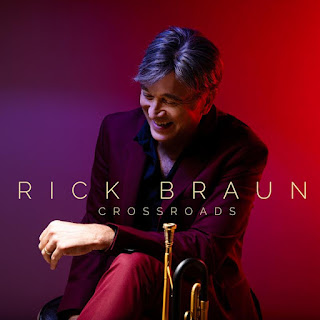 “As musicians and people in general, we are all a collection of the places we've been, things we've heard, seen and done, and people who we've loved and who have loved us,” shares chart-topping contemporary jazz pioneer Rick Braun. The trumpeter will release Crossroads on Shanachie Entertainment on August 16, 2019. The 10-track recording is a thrilling musical expedition giving us an intimate glimpse into Rick Braun’s inspirations. “At this point in life,” states Braun, “I'm grateful for the opportunity to make music. I think I'm just very comfortable with where I am in life right now.” Somewhat of a musical chameleon, Braun’s vision and virtuosity have allowed him to stand at the crossroads of the music world. He’s amassed over 20 #1 Smooth Jazz hits and collaborated with Sade, Tom Petty and REO Speedwagon, among others. Braun has produced No. 1 hits for David Benoit, Marc Antoine and Jeff Golub. He’s also achieved collaborative success on massive hits with Boney James as well as with the group RnR, with saxophonist Richard Elliot and BWB, a powerhouse trio completed by Grammy® winners Kirk Whalum and Norman Brown. “When I think about the word ‘crossroads,’ says Braun, “I think about the possibilities for the future as well as the places I have been.” In keeping with this theme Braun enlists a cross-section of friends both old and new. He’s joined by dear friends, keyboardist Philippe Saisse, guitarist Peter White, bassist Nate Phillips, tenorman Richard Elliot, drummer Eric Valentine and percussionist Richie Garcia. He also welcomes some first time collaborators keyboardist Greg Phillinganes, guitarist Michael Thompson, and drummer Gregg Bissonette. Braun explains, “The common thread is the musicality that everyone brought to this project. I'm so thrilled with the playing on this record. Everyone stepped up and I think there are a lot of wonderful musical moments to be heard.”

Shanachie VP of A&R, Danny Weiss states, “Rick's tone, chops and phrasing link him to the jazz giants of the past. He can hold his own in any setting. Yet he communicates to a vast audience far beyond the jazz aficionado. His warmth, wit and musical spirit make him a great communicator - a hit maker!”
﻿
Crossroads, Rick Braun’s 18th recording as a leader, opens with the percussive and funky “Around The Corner.” The song, which was inspired by his daughter Emma, is the perfect intro as it illustrates Braun’s knack for crafting memorable grooves with fluid and soaring melodies that have a way of instantly drawing you in. “Since my daughter Emma was born every project of mine has included a song for her that she can go outside and just let loose and dance to,” says Braun. “These songs usually end up being some of the most well liked songs on the record!” Braun co-wrote the Latin-tinged and breezy composition “Brazz Street” with Chris “Big Dog” Davis, who he likes to refer to as the ‘Neil Simon of music production.’ “He is one of the most talented arrangers and producers I have ever met. If I reach out to him and I tell him what I need on a record, more often than not he delivers me a track that just gets the job done so beautifully within days of my request.” The album’s first single “Crossroads,” is a buttery-smooth swinger that showcases Braun’s joyous interplay with longtime collaborator, friend and co-writer Philippe Saisse on keys and vibes. “Philippe first brought it in and it had a very four on the floor disco eurobeat and after I listened to it with the help of my co-producer Bud Harner (who also plays drums on ‘Family’) Philippe and I went back to the drawing board and turned it into this wonderful song that ended up being the title cut for the record,” shares Braun. “Philippe is definitely one of the most talented people I've ever known in my life. He is one of those people that pushes me to the next level.”

The show-stopping “The Moment I Saw You” is a sensuous and gorgeous Burt Bacharach/Hal David tinged ballad that almost stops you in your tracks while Stevie Wonder’s 1976 hit, “I Wish,” from the seminal Songs In The Key Of Life, is one of two memorable covers on Crossroads. Tenor saxophonist Richard Elliot, guitarist Tony Pulizzi, keyboardist Greg Phillinganes and percussionist Richie Garcia cut loose creating an exhilarating version that will dare you to sit still. “On my Beat Street CD I recorded a song called ‘Coolsville’ featuring upright bass over top of a hip hop kind of a groove. That was the musical influence for my version of Stevie Wonder's’ ‘I Wish,’ shares Braun. He adds, “Kenny Wild played upright bass and really brings this song to life. As an interesting side note Greg Phillinganes plays keyboards on this song and worked with Stevie Wonder for many years as well as Michael Jackson. Greg definitely brought this to the next level.” Crossroads also features “Me And You,” an intoxicating composition featuring Peter White that swells with intense emotion and beauty. “Peter is one of my oldest and dearest friends,” confides Braun. “We have collaborated on so many projects throughout our careers. When Peter White puts his touch on anything it just sounds amazing.”

Rick Braun is the ultimate family man on and off the bandstand. Not only did he pen “Around The Corner” with his daughter Emma in mind, but he welcomes 17 year-old son Kyle to join in a reinvention of Bruno Mars’ hit “Versace On The Floor.”

Greg Phillinganes was actually a keyboardist on the original Mars track. “Kyle’s passion is actually basketball,” states Braun. “However, when he comes home from practice or just wants to relax he always sits down at the piano and starts playing. I'm so happy that Kyle has kept music alive in his life. It always warms my heart to hear him play.” The track also features Braun’s longtime friend and saxman Richard Elliot. “I’ve produced so many of Richard’s records and he is as good as it gets. It's so wonderful to have someone like Richard Elliot to be able to call when I need to have a tenor solo that lifts the whole track to a whole other level.” The exquisite opus “Family” was inspired by Rick’s childhood memories of his maternal grandparents. His grandfather was a country fiddle player and his grandmother played piano and sang. “One of the few memories I have is of them playing one of my grandmother’s favorite songs from the 1800s ‘Silver Threads Among The Gold,” recalls Braun. He built upon that memory and further drew rhythmic inspiration from a Maroon 5 song that his daughter Emma was listening to one day in the car. “When it came time to play melody on it, the only melody that felt right was inspired by ‘Silver Threads Among the Gold.’ It has a real Americana feel. Bud (Harner) helped the song evolve and I have to credit Michael Thompson with his amazing guitar work and my friend Kenny Wild, who played the fretless bass on the song.” The seductive Bossa Nova groove of “Bahia” transports us to a place of tranquility and the R&B flow of “Come With Me” delights from beginning to end. Braun shares, “The song ‘Bahia’ was inspired by the work that Philippe did with Gato Barbieri. To this day Gato’s Que Paso record is one of my favorite ever and so when we sat down to do something for this project we use that as a point of departure.”

Rick Braun first picked up the trumpet at eight and felt an instant connection. “I loved the smell of the horn, the sound that it made and everything about it and I continue to love it. I am still inspired by many trumpet players,” declares Braun, who enjoys basketball with his son and playing tennis and golf when he can fit it in. "On a contemporary level I think Till Brönner continues to be a major influence. Looking back, the players who have influenced me most include Clifford Brown, Freddie Hubbard, Lee Morgan, and of course Chet Baker.” There was a time when Braun was contemplating pursuing medical school but luckily for us music won. Coming of age in Allentown, PA (about an hour outside of Philadelphia), Braun was acutely aware of the volume of jazz musicians who developed in his area. “The Brecker Brothers were a huge influence. My dear friend Jeff Lorber is also from Philadelphia and Keith Jarrett is from Allentown. There is a rumor in my family that Jarrett is actually my third cousin!” Rick Braun has enjoyed a career longevity that is rare in this business. He has crafted his own distinctive sound and become a staple on contemporary jazz radio. Braun has hosted an annual New Year’s Eve event for almost a decade that benefits autism. His daughter is autistic and Braun has made it a mission to bring awareness to autism. “One of my passions is just trying to help people who are affected by autism. It is really important for me to just reach out and help wherever I can,” shares the inspiring musician.

Rick Braun concludes, “As my fans listen to Crossroads, I'm hoping they can hear the sincerity in the music. I think the fact that I'm still around making music after all of these years is a testimony to how much I enjoy doing it. It's funny because musicians never retire. There is no reason to because we love our job so much to retire would be to leave something that we love. Most musicians just cancel the gig because, let's face it, we left the planet. I am most likely going to be one of those guys!”