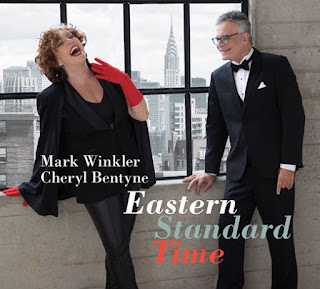 Vocalists Mark Winkler and Cheryl Bentyne go together like champagne and caviar. They’ve teamed up to record EASTERN STANDARD TIME, a sophisticated project of songs culled from known standards and several less familiar pages of the Great American Songbook, as well as a couple of originals by Winkler. This is their second CD together. The first, WEST COAST COOL, was released in 2013 and received critical acclaim and went to #16 on the Jazzweek chart.

For that project, Winkler and Bentyne chose tunes from the 1950s associated with the West Coast Cool sound. For EASTERN STANDARD TIME they reprise the concept, but this time present songs of East Coast lineage. They’ve  chosen songs that you would hear if you habituated jazz clubs in New York City back in the late 50s and early 60s. Although the CD comprises mainly duets, they each perform two solo pieces as well. EASTERN STANDARD TIME is a cool and cultivated project by two stellar vocalists who can transform whatever they sing into a statement of great emotional depth. Individually, Winkler and Bentyne are highly compelling performers. Together, they are musical powerhouses.