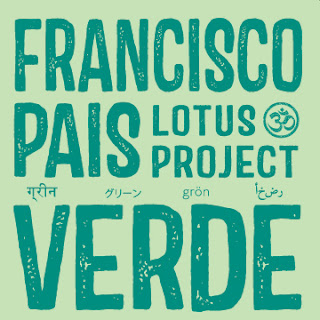 After three highly acclaimed albums, Portuguese born guitarist Francisco Pais has been exploring new music relentlessly with some of the most influential young lions in NYC. He is a creative tour-de-force who never ceases to try push the limits of what can be done in music.

For Pais this new album Verde means expansion. "When I make an album I am always driven by the creative collaborations I will have in order to give birth to any project. These musicians share my energy, my passion, my emotions and they believe in my music and my message. The expansion means getting bigger in depth though not in size," explains Francisco.

It's hard to describe what makes a musical collaboration work - there has to be just the right balance of tension and sympathy. That's what happens in Verde from the first note in the album. Francisco comments, "To be recording with the people I admire and love, my friends, it's truly a blessing. There is a connection amongst all of us. My goal is to facilitate a point of entry in my music that will allow everyone's unique skills and voice to be heard in a bold and honest manner. I see this recording as a ritual and an opportunity to birth creative impact in a world that needs light to shine trough. I am exploring my capacity for change. I am always evolving."

These musicians have been performing together for over 10 years, and the resulting instinctive, organic rapport shines through on Verde. The lineup for this album features saxophonists Myron Walden and Godwin Louis, longtime partner in crime drummer Ferenc Nemeth, pianist Julian Shore and bassist Connor Schultze.

Although this is a new band, Francisco shares a deep musical history with each musician. "I've been playing and touring with Ferenc since our Berklee years. Berklee sponsored my group to tour in Europe every year over the summer. It was a complete blast. I played several gigs with Myron in NYC and he was the sound that I was looking for. This perfect combination of soulfulness and artistry is why I invited him to play on both my 3rd album Raise Your Vibration and this one  In addition, I spent a handful of great years playing and recording with Julian Shore and Connor Schultze.

The sonic landscape presented on Verde is quite different from Francisco's 2012 and 2014 releases. This is a guitar heavy album, and the music is presented without edits or isolation, as captured in pristine detail by engineer Mike Perez at Big Orange Sheep Studios in Brooklyn and mixed by Grammy award winner and engineering guru James Farber at Shelter Island Studios in Manhattan. Senior mastering engineer Greg Calby at Sterling Sound in NYC did the final polish of Verde. Greg is a Grammy award winner that mastered artists such as Bob Dylan, John Lennon and Paul Simon to name a few.

While not a tribute recording in any way, this recording shows Francisco honoring all the guitarists who have inspired and informed his completely unique approach to the instrument and compostitions. You'll heard a myriad of sounds such as slide guitar, a screaming bluesy distortion, acoustic guitar, some drum'n' bass guitar synth sounds with reverse delays and a warm jazz vibrato guitar sound complementing his compositions in this album.  Francisco says, "This album embodies the deep inspiration I have taken over the years from my earliest guitar heroes, including Muddy Waters, Howlin Wolf, Robert Johnson, Chuck Berry, Jimmy Hendrix and Eric Clapton to name a few." Francisco filters his myriad influences (indie rock, R&B, jazz, Brazilian folk) into a singular, electrifying sound on Verde.

"I use to get all these magazines like Guitar Player and learn all the guitar licks in it. When I was a teenager at 14 I had a rock band and we played all kinds of hard rock, indie rock, funk and blues music. I was both the main vocalist and the lead guitarist. I used a Fender Stratocaster with a Floyd Rose. It was a blast! "

The tittle of the album Verde means green. "I come from a small village in Portugal called Sintra and there are thousands of shades of green over there. It's a magical stretch of mountains with Castles and Palaces that overlook the Atlantic Ocean. For me green is the color of hope and it has always been my favorite color. It also relates to our 4th Chakra located in our heart, called Anahata. I like to be aware of where the music is coming from and more than anything I wanted this music to shine through my heart. I wanted to encourage people to have an awakening during these crazy times. Lots of people are numb, consumed by technology, in fear of sending their children to school when we should be holding hands empowering each other. We must awake and teach each other not to give mental energy and unconscious loyalty to public figures who are shallow role models. We need to shine light and not criticize someone else's ability to shine light. We need a collective awakening."

A devoted yogi, Pais has played his own music all over the world with some of the best musicians in the New York scene. After an audition in Paris in 1998, Pais was awarded a scholarship to come to the United States to study jazz performance at the Berklee College of Music in Boston. In 2002, he graduated cum laude with a B.A. in Music Performance. In the following years he toured throughout the world playing at venues including Smalls, Shapeshifter and Joe's Pub (New York City), Ryles (Boston), The Rex and Trane Studio (Toronto), and Ducs des Lombards (Paris), among many others. Pais has also performed with a number of prominent musicians including Chris Cheek, Marcus Strickland, Seamus Blake, Gretchen Parlato, Becca Stevens, Myron Walden, Alvin Atkinson and Justin Brown. Pais has received numerous awards for his work from the Doris Duke Foundation, Chamber Music America and Rhode Island State Council for the Arts.