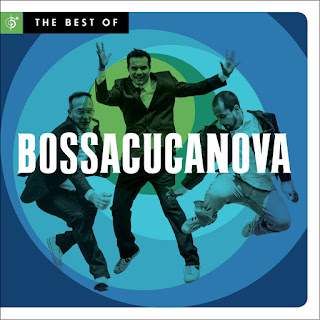 You can never tell what will happen when friends get together. The trio of Marcio Menescal, DJ Marcelinho DaLua, and Alex Moreira originally started remixing classic bossa nova tracks for fun. Eighteen years and five albums later, Bossacucanova has honored and helped evolve its native Brazilian soundtrack.

The Best of Bossacucanova (Six Degrees Records) assembles songs the band members feel are the most representative of their diverse and progressive catalog, including two brand new songs. As Menescal, son of legendary bossa nova pioneer Roberto, says, “We decided to choose songs featuring our best arrangements, most original beats, and top performances.” The album is set to be release on August 12.

As the trio initially had no ambitions of becoming a band, Menescal says that offered a kind of freedom when they worked on their debut album, Revisited Classics. In hindsight this collection offers a reflective gaze at what they’ve accomplished. Still, Menescal waxes poetic over the early days: “We like the beginning when we had no experience; that allowed us to be bolder.”

This is why the collection opens with a global lounge classic, ‘Berimbau,’ titled (and featuring) one of Brazil’s most famous contributions—the berimbau is the single-stringed percussive instrument rooted with a gourd, mostly known for its role in the martial art form, capoeira. Bossacucanova’s tribute features a meandering beat with a chant-style chorus that is a trademark of the nation's folk music. It features the voices of Os Cariocas, a group initially founded in 1942.

For this song and ‘Meditacão,’ which features vocalist and guitarist Wanda Sa (who cut her teeth performing with Sérgio Mendes’s Brazil ’65), Menescal borrowed original tracks from his father’s label and remixed them with “distorted guitars, flutes, amplifiers, and guitar pedals.” The samples were lifted straight from vinyl with a microphone placed near the monitor—a harbinger of today’s digital drag-and-drop techniques.

Bossacucanova has made its career by blending such Brazilian anthems, working with a pantheon of musical gods and goddesses while keeping tabs on emerging technologies. Never have distortion, DJ scratches, or electronic beats distracted from the melodic core that comprises the nation’s soul. This is nowhere more evident than in the upbeat hit, ‘Essa Moça tá Diferente,’ featuring a sample of Chico Buarque along with swing vocals by Wilson Simoninha and saxophone contribution by Leo Gandelman.

“Our great references are still the music and culture of the sixties through eighties,” says Menescal. “Brazilian music is very rich—it has several rhythmic styles, an abundance of harmonies, and extraordinary musicians. But we will always feel like we need to improve and refresh what has come before. And we have many projects with this in mind coming soon.”

It’s impossible to separate Brazilian culture from its political climate. The Tropicália movement of the early seventies addressed important social issues; the music, then and now, has long been a response to what’s going on around the country, a mirror for its people to meditate on and, ideally, uplift. Bossacucanova is in this latter camp, using music as a tool for unifying a people that is currently in the midst of a severe economic downturn.

“When the country faces times of crises, the culture reacts immediately,” says Menescal. “In difficult times, people renew themselves. We find intelligent, creative solutions. While all of this is happening, it is our role to have a positive influence on the people and in Brazilian music.”

This self-appointed ambassadorial position is certainly appreciated. The band’s next tour will be a survey of its nearly two decades making incredible music, progressively walking through its rich history. Members will blend the worlds they know so well: the expansive technological domain of previously unimagined soundscapes combined with the integrity and joy of live performance, the foundation of Brazil’s music since the beginning.

“Our band is a family,” Menescal concludes. “We’ve built this friendship over years of touring, living through a range of emotions: good times, fights, music and love. We hope there still will be lots of surprises left!”