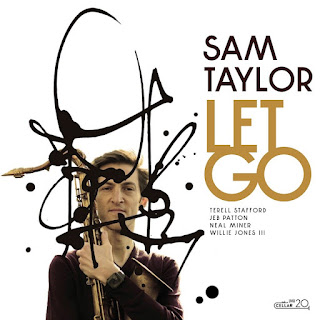 One bright morning last January, saxophonist Sam Taylor started his day by writing down his intentions. It was an important day, the day that he would lead a quintet featuring trumpeter Terell Stafford in the same historic recording studio where John Coltrane, Sonny Rollins, Freddie Hubbard and Stanley Turrentine recorded, to track his third album for Cellar Live. Locking in his focus, Taylor’s message to himself was to be grateful, mindful and fully present for the recording experience, and most importantly, to give and let go. The resultant ten-track swinging jazz set “Let Go,” produced by Taylor and Cory Weeds, drops October 21 on CD and October 28 digitally.

Taylor’s set list consists of selections from the Great American Songbook, including songs written by Barry Harris, Hank Jones, Benny Golson, and Jule Styne. However, one can argue that the centerpiece is Taylor’s own composition. The Harlem-based artist wrote the title track, marking the first time he ever recorded one of his own songs. “Let Go” embodies Taylor’s ethos as a musician.

“It was written during a year full of the unexpected, with invaluable new experiences and lessons. More than that was the validation of a virtue I have long held true in my heart as I live this life of music: music is an act of giving. Living a life of music is also a journey of generosity and letting go. The musician surrenders to the music, interprets the song and shares that with others. To surrender, to be tender and giving is a show of strength, an act of defiance. This is an empowering idea. Our world faces such heartache, fear and profound grief. How do we meet that every day as individuals and as a society? Tenderness and loving kindness could be the most powerful tools we have. In my own way, this recording is an act of defiance,” said Taylor.

Recorded at Van Gelder Studios, Taylor and Stafford are flanked on the album by a trio comprised of pianist Jeb Patton, bassist Neal Miner and drummer Willie Jones III. Taylor grew up in Philadelphia listening to Stafford, a renown and respected talent who teaches in the City of Brotherly Love at Temple University.

“Terell Stafford is an international jazz star, a fixture on the Philadelphia jazz scene and one of the city’s artistic leaders. To have the opportunity to know him and play with him now as a professional musician is truly special. I remember attending a workshop while I was a young student at The Performing Arts High School in Philadelphia. We took a bus up Broad Street to Temple University where students across the city sat and listened to Terell’s group play and speak about jazz. I remember his emphasis on rhythm, the triplet, how to feel the beat. He was giving and patient. I can honestly say he is just as genuine and giving now. It is an overwhelming honor to play this music with him,” said Taylor, who will perform at Rite of Swing Jazz Café at Temple University on November 10.

Released as a single last week, the album opens with the bebop anthem “Luminescence,” which was penned by Harris, a seminal figure on the New York City jazz scene who passed away a few weeks prior to the “Let Go” recording date.

Taylor first discovered the melancholy “Angel Face” from a 1940s recording by tenor saxman Coleman Hawkins but decided to record his own version after falling in love with a take he heard featuring one of his favorite singers, Abbey Lincoln.

“The melody is gorgeous, operatic in style and goes straight to the heart. Ms. Lincoln’s interpretation, including her own lyric, is perfection. She is a constant source of inspiration for me. Her honesty and fearlessness are undeniable,” said Taylor.

In choosing to interpret Golson’s  “Out of the Past,” Taylor pays homage to his hometown.

“The song has the classic Golson sound: lyrical melody, beautiful lead (sax) voice paired with the blues and deep swing. Benny Golson is a Philadelphian like me. As with my previous record, ‘Along The Way,’ it was important for me to honor and embrace my hometown while embracing my experience of over fifteen years living a life of music in New York,” said Taylor who will be running his first marathon in Philadelphia in November.

One of the more impromptu and magical moments that occurred during the “Let Go” recording date came at the end of the session. As the musicians were packing up their gear, Taylor asked the engineer to keep the tape rolling. With just his tenor horn and sparse accompaniment from Miner and Jones, Taylor emoted an impassioned “Prisoner of Love” with the woman he calls the love of his life sitting beside him.

“I first heard this old American Songbook standard on the ‘Coleman Hawkins Encounters Ben Webster’ two tenor record. It was one of the first records I really tried to understand. I would constantly play along with it without any real understanding of harmony or what I was doing. It just moved me, and I wanted to be a part of it somehow. This song has now taken on new meaning for me as I dedicate it to Maia. Recording it was a moment I’ll never forget, filled with such joy and love,” said Taylor.

“Swana’s playing, along with that of Larry McKenna, Bootsie Barnes and Sid Simmons really informed and inspired my choice to live a life of music. They showed me - and continue to do so - that being a musician is to be part of a community. The music is bigger than you, and living it means honoring those that came before, that lived and transitioned in its name,” said Taylor.

The album concludes with a pair of unlikely tunes. Taken from the musical “Annie,” “You’re Never Fully Dressed Without A Smile” is an earnest attempt to do something Taylor’s “all-time hero” had a flair for doing.

“It became my theme song over the year, one that I would always play in a tenor trio format - saxophone, bass and drums - on my weekly gigs in New York City. This is my favorite format if I’m honest, thanks to my love of Sonny Rollins. The song always makes people smile and tap their feet. Recording it is also a subtle way to honor Rollins, who is known as an indisputable musical genius who often picks the most unlikely of tunes and makes them incredibly hip and swinging. I hope we achieved that with this one,” said Taylor.

Closing the set is “Bye Bye Baby,” which Marilyn Monroe sang in “Gentleman Prefer Blondes.” Taylor’s rendition was influenced by a version he heard played at dazzling speed by pianist Harold Mabern.

Taylor studied and was mentored at Purchase College, State University of New York. Among his noteworthy performances was playing with saxophone greats James Moody, Jimmy Heath, Frank Wess, Joe Lovano, Steve Wilson, Mark Turner and Ralph Lalama. He released his critically lauded solo debut, “My Future Just Passed,” in 2015 followed two years later by “Along the Way,” which was the first time he teamed up with Patton and Miner. Twice Taylor has toured in Canada, and he’ll be supporting “Let Go” at concert dates there next month around the album release date. Closer to home, Taylor serves as artistic director for the West Harlem Jazz Festival.

In the “Let Go” liner notes, Taylor writes about music giving voice to an experience, both personal and collective. He believes music is an expression of love and respect, inspiring hope and a reason to overcome challenges and triumphs. Understanding the role music can and does play is why before stepping foot inside the recording studio earlier this year, Taylor put pen to paper to state his intentions.

“I invited my musical heroes to come together, to bring their powerful voices into a space, surrender and let go. Terell, Jeb, Neal and Willie were masterful. The space, a studio that echoes with jazz history, made the day that much more meaningful. I haven’t the words to express my gratitude. My hope is the music communicates that clearly and fully.”