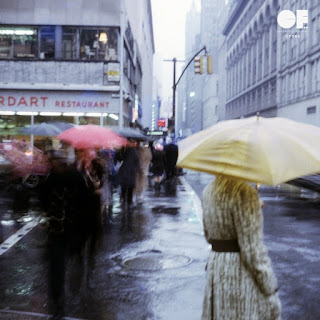 Music flows through Benny Bock like the crisscrossing freeways of Los Angeles. On his debut album, Vanishing Act, the keyboardist conjures the contrasts of living in big city and small town environments, infusing ambient jazz and folkloric arrangements with bristling electronic urgency. During improvised recording sessions with producer/engineer Pete Min (The Strokes, Orvile Peck) at his studio, Lucy’s Meat Market, Bock and a group of acclaimed musicians created a spellbinding instrumental cycle, channeling the feelings of existing in spaces of chaos or calm.

“As a whole, the album speaks to the interaction of rural and urban landscapes,” Bock explains. “I was just coming back to LA from my studies at Oberlin Conservatory in the Midwest when I started making the record, so that transition was a big thing on my mind. I incorporated a lot of open, pastoral motifs that bump up against jagged, fast-paced sounds.”

This tension is apparent in the contrast between the album’s two opening songs. “Erwin’s Garden” – named for one of Bock’s first teachers, the jazz musician Erwin Helfer – is a sparse piano piece draped in sighing string arrangements by Daphne Chen. “Dynamo” adds the frenetic pulse of a drum machine, before integrating prepared piano, plucked pizzicato, and warm synth squelch. “I’m trying to join the synthetic and organic worlds as much as possible,” says Bock.

“Eight Below Zero” continues his electroacoustic juxtapositions. On this song, Bock’s melancholy synths are accompanied by Rich Hinman on pedal steel, Abe Rounds on drums, CJ Camerieri on trumpet and flugelhorn, and Logan Kane on upright bass. “That song was written about a certain day where I had to say goodbye to a friend when it was literally eight degrees below zero in Ohio,” Bock says. “It was freezing. The title is also a nod to the Sonny Boy Williamson song ‘Nine Below Zero.’ There are some blues themes in there.”

Vanishing Act is the young artist’s debut album, yet he has already worn many hats: jazz pianist, session musician, sound designer, producer, and composer for film and television. Shortly after graduating high school, Bock began working with Tom Oberheim, the synth innovator whose last name should be uttered alongside Moog and Buchla. More recently, Bock’s collaborations have included Blake Mills, The Beach Boys’ Bruce Johnston, and The Weeknd, for whom he co-wrote the Dawn FM song “Here We Go…Again” (featuring Tyler, The Creator).

These experiences set the stage for his improvised recording sessions with producer Pete Min, which found Bock playing a laundry list of keyboard instruments such as Steinway grand piano, Oberheim Four Voice synthesizer, pump organ, and celeste. He cites influences including the orchestral studio albums of David Axelrod and Brazil’s Arthur Verocai, the bedroom productions of Juana Molina, and the playful jazz experiments of his LA contemporary Sam Gendel. The album will be released by Min’s new label, Colorfield Records, in which spontaneity and reaction are integral to the process of creation. Like the freeways of LA, Vanishing Act’s instrumental songs introduce a vast range of possibilities, where the destination is only part of the journey. ~ Jesse Locke