The Headhunters - Speakers In The House 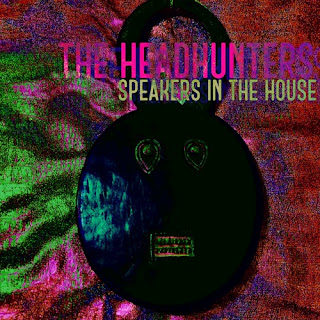 The Headhunters have released "Rocking At The Mole House", the first single from the legendary jazz-funk quintet's forthcoming album, Speakers In The House, out November 4 on Ropeadope Records. Opening with a New Orleans press roll beat, which nods to the home of four of the five current band members, it quickly transitions to the signature funk synths and alto sax lines that the band has been revered for going on nearly 50 years.

"Rocking At The Mole House" takes its title from the nickname for the childhood home of Mike Clark, drummer and co-leader of The Headhunters, as it rapidly rotates between his tight kit work and co-leader Bill Summers' assortment of African, Cuban and Haitian percussion. Adding to the dizzying layers of arabesque melodies is NEA Jazz Master Donald Harrison on alto saxophone and digital programming added by producer One Drop Scott aka Scott Roberts, a collaborator of Summers since the late-70s, as well as Wayne Shorter and Charlie Hunter. Beyond the infectiously complex and funky arrangement, Clark’s drum solo around the three minute mark is hypnotic and bullseye precise.

The Headhunters forthcoming full-length studio album, Speakers In The House, is the first new music from the band in eleven years. The eight track collection features the core quintet comprised by percussionist Bill Summers, drummer Mike Clark, saxophonist Donald Harrison, keyboardist Stephen Gordon and bassist Reggie Washington along with special guests Jerry Z on organ, Scott Roberts on drums, Fode Sissoko on Kora and Ashlin Parker on trumpet. The Headhunters spirit is alive and well as the band approaches its 50th anniversary since forming around Herbie Hancock's classic album, Head Hunters, released in 1973.

"What Bill and I and The Headhunters do is experience the moment and explore," explains Mike Clark. "We're not in a gym, this isn't a competition. This is art. We’re in that moment and there is no other. The Headhunters is an act of passion, of love for humanity, and for our planet."

"We live this every day. We have some secrets to give to the youth of the world. We’re not musicians, we are physicians. We heal people," adds Bill Summers. "We've always made a statement as The Headhunters. Every time we've dropped notes on wax, it's had value and the ability to positively influence people and change lives."