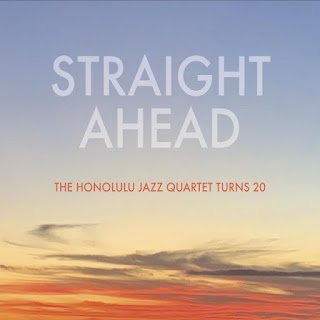 The Honolulu Jazz Quartet was formed by bassist John Kolivas, at the urging of his musician mother Dolly, just a few months before September 11, 2001.  The group marked its 20th anniversary in the throes of the worldwide pandemic.  That this milestone achievement by Hawaii’s most enduring jazz combo is framed by the two most tumultuous, world-changing events of this century is emblematic of how we have all survived in these challenging times: by moving forward, straight ahead. Indeed, it is the very essence of improvisational jazz to constantly flow, or sometimes push, forward through the chord changes of a song, always in search of reaching new musical heights, or playing something no one has ever heard before.

This album, the group’s fourth, is a celebration of their perpetual movement forward, straight ahead, through two decades of trials and triumphs. It is also a harbinger the musical adventures that await them as they embark – straight ahead – into their third decade.

One of the secrets to the group’s longevity is that they are a musical democracy. Although Kolivas is HJQ’s founder, the quartet has no front-man in the traditional sense (i.e., the John Contrane Quartet). The front-man has always been the sound the group makes together. Every time they perform, four distinctive, highly individualistic musicians come together to create one sound, a sound that is far greater than the sum of its parts.

When hearing John Kolivas strike a note on his bass, a soft, warm feeling shoots up your spine and radiates to your face. His playing lays down a bottom so solid a herd of elephants could dance over it.

Saxophonist Tim Tsukiyama channels the all-time great artists on his instrument – Lester Young, Ben Webster, John Coltrane, and Wilton Felder. But he has a distinctive voice of his own and is a thinking man’s horn player.

Pianist Dan Del Negro hails from the South Side of Chicago and brings a funk sensibility to the group. But Dan can play anything: from musical theatre; to be-bop; to spacey Herbie Hancock and McCoy Tyner chords; to Funkadelic, to classical, and all points in between.

When drummer Noel Okimoto took over as the group’s percussionist (replacing Von Baron after his move to Japan), everyone knew that the Honolulu Jazz Quartet had come of age.  Noel’s Hawauu-jazz legacy, from his days with the legendary Gabe Baltazar and with the Betty Loo Taylor trio backing up the incomparable Jimmy Borges, brings a maturity, precision, and power to the Honolulu Jazz Quartet that has taken the group up a whole new level.