The Jones Factor | "The Time Is Now" 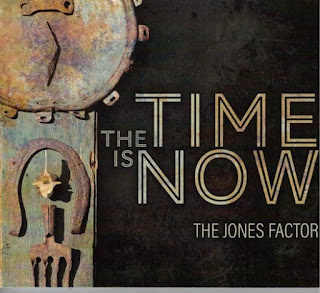 Uncertainty brought on by the pandemic has inspired major life changes as well as creating a sense of urgency when it comes to completing long-gestating projects. Five years in the making and fifteen years since their last release, jazz ensemble The Jones Factor committed to finishing their third album, “The Time is Now,” as soon as pandemic restrictions eased and the ten-piece horn-powered band could gather safely in the studio. The contemporary jazz collection comprised of original compositions and inventively arranged covers, produced by the group’s Dave Anderson and John Fumasoli, drops July 15.

Trombonist Fumasoli formed The Jones Factor (originally called The Jazz Collective) in 1986 with bassist Anderson joining shortly thereafter. Horn heavy, they described themselves as “a little big band” and together, they crafted over one hundred charts spanning various shades of jazz, including contemporary, bop and hard bop as well as Latin, blues, funk and even hip-hop grooves. The unique instrumentation allows for a wide variety of textures, colors and sounds while the diversity of the unit’s players makes for exciting performances and imaginative improvisation.

The challenge inherent for a band comprised of busy first-call musicians who have played with jazz, pop and R&B legends (from Frank Sinatra to Tony Bennett, from Lady Gaga to Diana Ross, from Elton John to Steely Dan) as well as prominent orchestras, symphonies and ballets is being able to gather all the members. Thus, work on their albums takes a while and they were about three years into recording “The Time is Now” when the pandemic slowed the process to a halt. As soon as the band got the greenlight to get back to work, The Jones Factor returned to the studio with a renewed impetus to finish and release the project.

“The album title comes from the fact that we were moving along great with our recording and then COVID hit. Like so many others in the music world, our lives were deeply disrupted and so we got to the point of saying that this album has to come out now. We cannot wait any longer, no matter what! Honestly, it was as much about getting off our butts and getting this music out as it was about the pandemic. The album is too good to sit on,” said Fumasoli who will lead the band at an album release concert on July 13 at La Zingara in Bethel, Connecticut.

From a production standpoint, Anderson opted to utilize a different tact than one typically associated with jazz ensembles.

“Recording this album was in one sense a straightforward application of everyone’s high-level professional skills, and in another sense an interesting experiment in trying new ways of doing things – not without risk – that ended up exceeding our expectations. My idea was to approach it the way non-jazz records have been recorded since the late sixties: building the sound in layers and creating the finished ensemble in the production environment. Doing this allowed John and I the freedom to finesse balances, phrasing and tone colors in a way that can’t be done as easily when everyone is in the studio at the same time. In other words, we produced this album like a pop or rock record. There’s plenty of seat-of-the-pants, fire-breathing improvising, but the sonic picture has the polish of a more structured pop production. It’s a best-of-both-worlds approach, and I feel we succeeded beautifully.”

“The Time is Now” opens with a pair of tunes by jazz fusion groups that have influenced The Jones Factor, the Yellowjackets’ “Past Ports” and Steps Ahead’s “Pools,” both arranged by the late Dick Burlant, who had been part of The Jones Factor’s orbit since the 1980s. “When He Calls” is an original composition by Patti Preiss-Harris, Bill Harris’s late wife, and has a wealth of personal meaning.

“The very first time we played it, we dedicated it to Patti’s father, who was going through heart surgery at the time. When he passed away six months later, we played it at his memorial service. It was always his song to me after that and usually brought tears to my eyes when I introduce it. Now that cancer has claimed Patti, the song feels very prophetic. She got the call. The song continues to bring a tear to my eye, now for different reasons,” said Bill Harris.

One of Fumasoli’s students suggested that The Jones Factor record Bela Fleck’s “Hall of Mirrors.” Multiple Grammy nominee and three-time Emmy winner Minucci lends his agile and intricate fret work to the track, captured in this studio performance video: https://bit.ly/3th8Aif.

Seven soloists shine on “Those City Ways.” Anderson said, “‘Those City Ways’ is a live performance arrangement – essentially a framework for blues solos by most of the band. To keep the long-form, extended nature of the piece interesting, I did hip-hop cut-and-paste arranging, bringing the piano in and out to make the contrast between ensemble writing and soloing more dramatic.”

The Jones Factor released their debut recording, “Collective Jazz,” in 1991 and issued their sophomore disc in 2007, “Blast From the Past.” While eager for “The Time is Now” to finally drop this summer, they’ve already synchronized their schedules to return to the studio this fall to record new material written by Fumasoli.