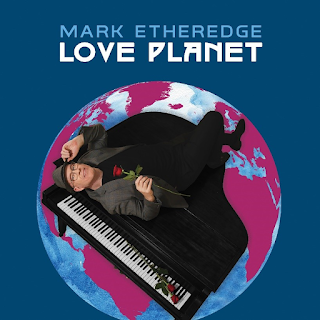 That pianist Mark Etheredge appears smiling on the cover of his new contemporary jazz album, “Love Planet,” offering roses – his songs – to the world is a triumphant story of resilience. Since the title track of his last album, 2016’s “Connected,” landed him at No. 6 on the Billboard singles chart, the keyboardist slipped into the abyss of alcoholism, going bankrupt and losing his West Hollywood home, which forced a move back to the Bay Area where he slept on a friend’s couch and watched his mother slowly slip away before she finally succumbed to Alzheimer’s disease last year.

As “Love Planet” readies for its August 12 release on Vipaka Records, the now clear-eyed Etheredge is back living in his own West Hollywood place, clean and sober for fourteen months, living one day at a time with hope restored. During the tumultuous years, Etheredge found strength and creative expression by retreating to his keyboard to compose music. Reteaming with “Connected” producer and two-time Grammy winner Paul Brown, Etheredge recorded and released two singles, “Resonance” (2019) and “You & M e& We” (2020), both of which appear on “Love Planet” alongside eight new songs.

“‘Love Planet’ is about love for each other, as well as self-love. I was taught growing up that everyone is born with a sense of goodness, and I still believe it’s true. And that goodness is totally inclusive. With all the craziness on this planet, it’s easy to lose sight of that. These days, I wake up asking, ‘What can I do to be more loving today?’” said Etheredge.

On “Untethered,” he celebrates his newfound sobriety, with his pliable piano passages getting a boost from chart-topper Steve Oliver, who issues placid nylon-stinged guitar licks.

“I literally drank my money away. During the pandemic, I finally accepted that I had a problem with alcohol. I got help. This song expresses my gratitude and joy to be free, one day at a time,” said Etheredge, who later on the album echoes the sentiment with “Elated.”

Tenor saxophonist Greg Vail adds fullness to “Groove City,” a cut inspired by the diversity, energy and the rhythms of urban life. The Latin-singed “Saucy” is spiced by full-throated horn section tracks performed by Vail (tenor and baritone saxes) and Ron King (trumpet, flugelhorn, horn arrangement), and scorching electric guitar riffs played by Brown and Shane Theriot. Etheredge ruminates on trust and the role love plays in the face of adversity on “We’ll Make It Through.”

“This one is about trust, hanging on. Sometimes, life brings along a bumpy ride. Trust that together with love, we’ll make it through,” said the keyboardist who is accompanied on the album by guitarist Jay Gore, bassist Roberto Vally, drummers Joel Taylor and Gorden Campbell, and percussionists Lenny Castro and Richie Gajate Garcia.

The penetrating piano melodies on “Resonance” explore human connection and attunement. “I think as humans, we all have opportunities to resonate with each other - to be in tune and find peace with each other - if we want it enough,” said Etheredge who amiably shares the spotlight with Brown’s bluesy guitar statements.

Watching the war, unnecessary death and destruction in Ukraine on television stirred Etheredge to pen the contemplative and compassionate plea for “Peace.” Brown is called upon to help illumine “You & Me & We,” a lush piano and guitar romp pondering unity.

“How can we coexist peacefully with one another? Perhaps if ‘you and me’ think not just about one or the other’s wants or needs, but consider a third way, “us,” focusing on our shared interests that benefit us both. Can we be kind? Can we practice compassion and justice? Can we be loving? Can we be respectful of one another?” Etheredge poses.

Etheredge offers “Golden Hour” in fond remembrance of his mother, who used the term for the times she took a nap when he was a child. Like “Saucy” and “Elated,” the album closer benefits from Theriot’s skilled rhythm guitar textures.

Etheredge grew up near San Francisco in Sunnyvale and although his mother was a music school teacher and choir director, he’s primarily a self-taught pianist. His groups have opened for David Benoit, Bobby McFerrin, Sergio Mendes, Tuck & Patti, Betty Carter and Sheila Jordan, among others. This year, Etheredge was the featured soloist on singles released by Vally (“On The Down Low”) and guitarist Mark Carter’s “Swingtown.”