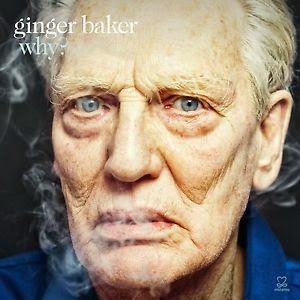 Ginger Baker was once considered the musician least likely to survive the ‘60s. And yet, in 2014, he finds himself on the ascent. The award-winning 2012 documentary Beware of Mr. Baker brought renewed attention to his singular music, fiery and self-destructive personality, and dramatic life story. Ironically, his extreme adventurousness and impulsivity—evidenced, for example, by his leaving England and moving to Nigeria in 1970 to play and record music—are the same qualities that helped make him such a versatile and continually evolving musician. Baker has long ranked among the world’s greatest drummers, and critics have deemed his recent live shows with his quartet, Jazz Confusion, some of the best work of his career. On June 24, Motéma Music releases Why?, his first new recording in 16 years, coinciding with a thirteen-date North American tour with Jazz Confusion June 14-30.

For his time with the Rock and Roll Hall of Fame-inducted band Cream, Baker is often credited with revolutionizing rock drumming and influencing countless other rock drummers. But he has always been, first and foremost, a jazz musician. What distinguished his playing in Cream, Blind Faith and other bands, aside from his stunning virtuosity and dramatic flair, was the fact that he was essentially the first “jazz-rock fusion” drummer. He brought to rock the jazz technique he learned from his deep study of music by the likes of Baby Dodds,Max Roach, Elvin Jones and Art Blakey. Baker’s setup (two bass drums instead of one) and style (improvised drum breaks and solos) made him unique amongst his peers.

Baker’s love of jazz also cannot be decoupled from his deep appreciation for African music, introduced to him in the early ‘60s by his idol and friend Phil Seamen, which Ginger manifested in own his playing through the heavy use of toms, introducing an oft-imitated tribal sound to rock. This influence has been an essential part of Baker’s style throughout his career. It is no surprise then that African rhythm is a key ingredient on Why?

The inclusion of Abass Dodoo in Jazz Confusion accentuates the African feel of the album and hearkens back to Baker’s friendship with another Ghanaian percussionist, the master drummer Guy Warren. While visiting Warren in 1970, Baker became fascinated with the music he heard on a Nigerian radio station, contacted his friend Fela Kuti, went to Lagos, and decided to build a recording studio, Batakota (ARC). During construction, Baker and Kuti recorded Fela Ransome-Kuti and Africa 70 with Ginger Baker: Live at Abbey Road and London. Baker still considers that album one of the high points of his career. (Once ARC opened, in 1973, Paul McCartney and Wings recorded part of Band on the Run there.)

Baker continued to reveal his jazz chops in the Ginger Baker Trio (with Charlie Haden and Bill Frisell) and DJQ20 (with Ron Miles, Artie Moore and others), with whom he recorded his last album, Coward of the County in 1998. Why? is the next step in Baker’s return to his jazz roots, a culmination of his storied career and an amalgamation of his jazz and African music influences.

Why? features material Baker has explored while performing live over the last two years with Jazz Confusion. The music ranges from Wayne Shorter’s “Footprints” and Sonny Rollins’ “St. Thomas,” to “Aiko,” which adapts a Nigerian folk tune. The album’s title track echoes Baker’s early music with the Graham Bond Organisation, and represents Baker reflecting on his life: on the personal loss he’s experienced, the dreams he’s had fulfilled and destroyed, asking the question “why?” The tune starts with a prison work song about a man who killed his wife, and also includes “Wade in the Water” as a remembrance of Graham Bond, who died tragically in 1974.

Reviewing Baker and Jazz Confusion at Iridium last fall—Baker’s first New York City club gig since 1997—Ben Ratliff wrote in The New York Times that the band “comes to jazz sideways or through very old roots…Mr. Baker’s sound is so imposing and broad, slow and confident. It’s not loud with ambition, but with spirit and intent.”

Ginger Baker’s recognition as a drummer began during his time in the Graham Bond Organisation, a band that toured with The Who, The Troggs, The Moody Blues and Chuck Berry in the early 1960s, attracting press interest for their outrageous behavior and riotous fun. By 1964, Melody Maker journalist Chris Welch had deemed Baker “one of Britain’s great drummers.”

Baker met Eric Clapton in 1966. The two were mutually impressed with each other’s playing after jamming together,  leading to Baker inviting Clapton to join his band. They soon added bass player Jack Bruce to form Cream. In Baker’s own words, they created “instant magic” and as a touring act broke box office records previously held by The Beatles.

After Cream came Blind Faith, in which Steve Winwood and Rick Grech joined Baker and Clapton. The band made just one album. When Clapton and Winwood left to pursue their own projects, the remaining members went on to form the jazz-rock fusion group Ginger Baker’s Airforce, which added sax, flute, organ and extra percussion.

During a trip to Africa Baker found himself inspired by Nigerian radio. Although there was a war going on, he was adamant about visiting Nigeria, and pushed to set up Batakota Studios in Lagos. Music aside, Africa afforded Baker a wonderful climate and a healthier lifestyle than that of rock n’ roll and touring. He discovered his love for polo and rally driving there, too.

Baker’s work with Airforce and his friendship with Fela Kuti paved the way for Baker’s next musical project: to work with African musicians. With his friend Fela Kuti, at Abbey Road, he recorded the landmark Fela Ransome-Kuti and Africa 70 with Ginger Baker.

Baker then went on to form the British band The Baker Gurvitz Army. Baker provided “extra sounds” on the debut album, such as wheel spins from his Jensen FF on the song “Mad Jack.” He also rode a wheeled swivel chair backwards down a flight of stairs for the LP’s second track.

After setting up a second recording studio, in North London, Baker formed Energy. Since then he has performed at various live events, such as Verona’s Percussion Summit and his own 70th birthday party, with special guest Steve Winwood, at Camden’s Jazz Café.

Ginger Baker’s Jazz Confusion made a sold-out four-night debut in 2012 at Ronnie Scott’s Club in London.